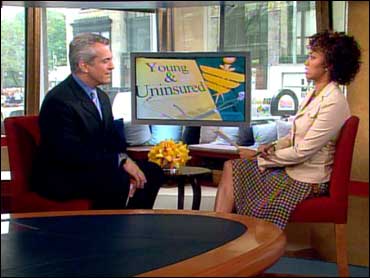 Despite relatively low unemployment rates the last five years, the number of young adults without health insurance has skyrocketed. More than 15 million people between the ages of 18 and 34 are now living without medical coverage.

Martin says there are two factors behind the growing number of young adults who don't have health insurance.

First, changes in the workplace mean fewer jobs now have full benefits: Only 60 percent of employers offered health insurance to new employees in 2005. Young adults entering the workforce are finding that many jobs out there are now consulting, freelance and contract positions that don't provide benefits.

Second, the cost burden for insurance is shifting from the employer to the employee. New workers who are young, healthy and don't yet have families of their own are deciding they don't want to pay a couple of thousand dollars each year for benefits they feel they don't need.

But Martin emphasizes, "I strongly advise that no one go without health insurance, even for a few months. Why? Because you're exposing yourself to a major financial expense that can take years to recover from or ruin your credit history. In fact, lack of medical insurance is the No. 1 reason cited by people who file for personal bankruptcy."

Martin says some young adults who were covered under their parents' plans get kicked off when they graduate college. They typically have what the health insurance industry calls a "change of insurable status." Even if a young adult is covered as a dependant under his or her parents' employer-provided health insurance, many group health plans only cover dependant children up to age 19, or up to age 23 or 25 as long as they are full-time students. With many plans, as soon as the student graduates high school or college, he or she is no longer a covered dependant and no longer has health insurance.

But, because so many young adults are going without health insurance, more and more states have enacted laws designed to give them more breathing room, allowing children to remain covered as dependants on their parents' health plans well into their 20s. In New Jersey, which enacted the highest age limit this year, children can actually remain covered under their parents' health insurance until they turn 30.

Also, Martin points out, there are some ways to keep health insurance after you lose coverage.

COBRA, the Consolidated Omnibus Budget Reconciliation Act initially designed to let individuals continue coverage under their employer's group plans after they changed or lost jobs, can also apply to dependant children who lose coverage because they end their status as full-time students. Graduates previously covered under their parents' group coverage have 60 days from termination of coverage to elect to pay for coverage under their parents' employer-provided plan. The cost of coverage will be the cost of the particular employer's plan. Coverage can be expensive, but there are typically no restrictions for preexisting conditions, which can be a significant benefit. This can be discontinued at any time, such as after permanent coverage is found.

There are also options for young adults who continue their education but aren't eligible to be covered under their parents' plans.

For full-time students who fall under that category, there's the student health plan, which are offered either by the school or through independent insurance companies, such as eHealthInsurance.com. School-provided policies may require using the on-campus medical facilities and may be more restrictive than policies obtained elsewhere. These policies cover graduate students and are typically available regardless of age or health. The cost of a typical student health policy is about $70 per month for a plan with a $1,000 deductible and a 20 percent co-payment. Also, many college alumni associations offer health insurance to graduates.

There's also a plan for those who aren't in school but need coverage for short spans. It's called short-term health coverage and it's offered by a select group of insurance companies. It features coverage for periods as short as one month and as long as 12. This can be a good option if you can't remain as a covered dependant on your parents' plan and you aren't yet eligible for coverage that comes from a new job. One drawback, though, is that pre-existing conditions aren't covered.

As an example, the Celtic Insurance Company offers a short-term health plan that can cost about $114 a month with a deductible of $2,500. After that is satisfied, the coverage pays up to 80 percent of the next $5,000 in covered expenses, then 100 percent of covered medical expenses up to $2 million. Other companies offering short-term health insurance include Fotis Health and Golden Rule.

Still another possible choice is health insurance with high deductibles. These policies are primarily designed to offer affordable coverage for major health and medical expenses. The cost is relatively low, because covered people must first satisfy a high deductible, ranging from $1,000 to $15,000, depending on the plan. These policies aren't intended to pay for routine doctor's office visits or trips to the emergency room for minor ailments. These plans come with an option to open a Health Savings Account, or HSA, which allows you to make a tax-deductible contribution to the account in the amount of the deductible, up to $2,650 for single people. That money accumulates interest tax-free and can be withdrawn tax-free to pay for out-of-pocket medical expenses, such as deductibles and co-payments. While this can be affordable coverage for unexpected and large medical costs, you will still need to come up with the first $2,650 in expenses (either from your HSA or out-of-pocket) to satisfy such a deductible if you incur a serious illness or accident.