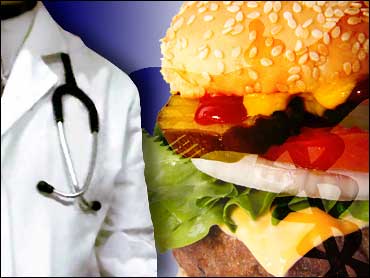 The investments of large insurers of health, disability and long term care in fast food chains like McDonald's and Pizza Hut have raised the interest of a study in the American Journal of Public Health, reports CBS Radio News' John Hartge.

The Harvard Medical School's Dr. Wesley Boyd, an author of the study, finds it ironic that these firms would invest nearly $2 billion in companies that sell food often linked to obesity and cardiovascular disease.

"The insurance industry, so far as it seeks to make a profit, it does so in an amoral way," Boyd said.

Among big investors in fast food companies are life and disability insurers, like Prudential Financial, Northwestern Mutual and Massachusetts Mutual.

Holland-based ING, an investment firm that also offers life and disability insurance, has total fast-food holdings of $406.1 million, including $12.3 million in Jack in the Box, $311 million in McDonald's, and $82.1 million in Yum! Brands, which owns Pizza Hut, KFC and Taco Bell.

The authors write that the recent passage of health care reform will likely expand the reach of the insurance industry, arguing that if insurers are to play a greater role in health care that they should be held to a higher standard of corporate responsibility.

"There's a ton of irony in it," said Boyd, a psychiatry professor. "In order to generate profits, they will invest in any area they need to … to make money, even if what they invest in, in this case fast food, is an industry that is known to cause people to get sick and to die early."