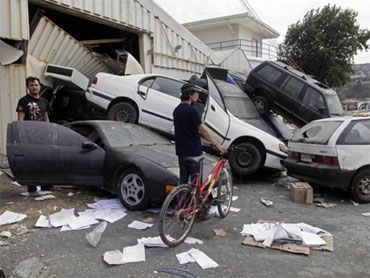 Huge piles of wreckage and tons of rotting fish and other debris blanketing the ground are turning the coastal towns shattered by Chile's earthquake and tsunami into nests of infection, doctors warned.

As calls for medicine and shelter grew, U.N. Secretary-General Ban Ki-Moon flew into the heavily damaged city of Concepcion aboard a Chilean air force plane Saturday, following at least six moderate aftershocks. He was driven immediately to the city's ground zero, where a building had collapsed and a couple called out one last time to a missing son believed killed in the wreckage.

As Chileans lined up for hepatitis and tetanus shots Friday on the opening day of an extensive vaccination campaign, doctors said cases of diarrhea are increasing from people drinking unclean water and a growing number of patients are suffering injuries wading through the mess.

"We are going to keep needing water, electric systems, a functioning sewage system. We need to clean up rotting fish in the streets. We need chemical toilets, and when it starts raining, people living in tents are going to get wet and sick. All this is going to cause infections," said Talcahuano Mayor Gaston Saavedra, whose port city was heavily damaged by the Feb. 27 quake and tsunami.

The government faces other health care problems. Looting of pharmacies has made medicine scarce for people suffering from diabetes, hypertension and psychological illnesses, and 36 hospitals were heavily damaged or destroyed in the quake.

Chile said more than a dozen of its own military and civilian field hospitals were operating Friday. Mobile hospitals from a half-dozen other countries also were opening or about to open - an unusual situation for a country that proudly sends rescue and relief teams to the world's trouble spots.

But most of the foreign units weren't treating anyone a week after the disaster. Chile insisted donor nations first figure out how to coordinate with Chile's advanced, if wounded, public health system.

A Peruvian field hospital opened in Concepcion on Thursday with three operating rooms and 28 beds. But surgeons and trauma specialists stood with their arms crossed Friday, waiting for patients to be sent by local health officials.

Luis Ojeda, a Spanish doctor working with Doctors Without Borders, said his team arrived Monday but was still waiting for Chile's instructions on where to deploy.

"This country is atypical," Ojeda said, adding he'd spent his time checking on the displaced in tent camps.

Chile signed an operating agreement for a U.S. field hospital Friday, enabling 57 U.S. military personnel to work side-by-side with civilian Chilean doctors in coming days to support a population of 3,000 in the town of Angol. In Rancagua, a Cuban field hospital was fully operational.

The Chilean Health Ministry said that there had been no outbreaks of dysentery or other communicable diseases and that it has enough tetanus and hepatitis vaccinations for the disaster zone.

Doctors couldn't access clean scalpels because a sterilization room was too dangerous to enter. Peruvian doctors donated their sterilizing equipment, which was quickly put to use for the amputation of four infected toes from Aaron Valenzuela, who stepped on broken glass Monday while looking for drinking water.

He was sent home after surgery because of the hospital damage.

"They threw us all out and told us to go home," Valenzuela said as he limped away.

The emergency room supervisor, Dr. Patricia Correa, said her part of the hospital "is on the point of collapsing."

"The walls cracked," she said.

The most powerful aftershock in six days sent terrified Chileans fleeing into the streets and forced doctors to evacuate some patients from the regional hospital. The magnitude-6.6 shock at 8:47 a.m. rattled buildings for nearly a minute and sent office chairs spilling from an exposed upper floor of a badly damaged 22-story office building.

At least six smaller aftershocks shook Chile on Saturday morning, the largest of which had a preliminary magnitude of 5.1, according to the U.S. Geological Survey in Golden, Colorado. No additional damages or injuries were immediately reported.

Authorities decided Saturday to completely demolish a 15-story building that had partially collapsed in the earthquake in the neighborhood visited by U.N. Secretary-General Ban, after emergency workers determined there were no more survivors to be found.

But one couple took one last walk through the wreckage where they called out in vain for their missing son, Jose Luis.

Survivors of the quake struggled to find medicines and fill prescriptions because pharmacies were looted earlier in the week and power outages still affected businesses and clinics. More than 100 people lined up outside one of Concepcion's few open drug stores on Friday. Soldiers stood guard nearby.

"I haven't taken my medicine for two or three days. I really should take it every day," said Miguel Hidalgo, a retired truck driver with chronic hypertension who was told there was one package left of a drug he needs to keep his kidneys working.

"People have nowhere to go to get medicine," said Dr. Solange Cadiz Iturrieta, who joined volunteers handing out donated drugs to people outside a community radio station.

Housing Minister Patricia Poblete said at least 500,000 homes were destroyed but she expected that figure to reach as high as 1.5 million once surveys are complete. In New York, Chile's U.N. ambassador, Heraldo Munoz, said reconstruction will cost Chile an estimated $30 billion.

Officials struggled to determine the death toll. Disaster officials announced they had double-counted at least 271 missing as dead - an error that would drop the official death toll to about 540 without other mistakes. Interior Department officials said they would now release only the number of dead who had been identified: 452 as of late Friday.

After days of finger pointing over the disaster response, President Michelle Bachelet and President-elect Sebastian Pinera agreed Friday to set aside their differences and work with "unity, solidarity and generosity."

"The new government will have an immense challenge, and we will do our job until the last day" before Thursday's inauguration, Bachelet said.
By Associated Press Writers Michael Warren and Eva Vergara; AP Writers Vivian Sequera in Concepcion and Federico Quilodran in Rancagua contributed to this report