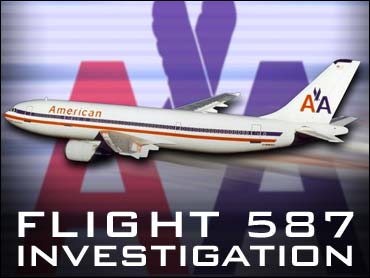 The investigation into the crash of American Airlines Flight 587 in New York last year involves many complex technical questions that can be boiled down to a simple query: What caused the tail to snap off?

The National Transportation Safety Board's four-day public hearing on the accident begins Tuesday. NTSB spokesman Ted Lopatkiewicz said the agency probably won't decide the probable cause of the crash until next year.

The hearing itself is not without controversy. Many of the relatives of the people who were killed live in New York City and are angry that the hearing is being held in Washington, a location that makes it expensive for them attend.

The families, many of whom are immigrants from the Dominican Republic who speak little English, have also asked that they be provided with simultaneous translation of the testimony.

Most of the people who died in the crash were Dominican.

The safety board sent a letter dated Oct. 11 to the victims' families, inviting them to attend Tuesday's proceeding.

The crash was the first of an Airbus aircraft in North America. Investigators have ruled out terrorism as a cause, as well as engine failure, fire and contact with birds.

The plane crashed 103 seconds after taking off for the Dominican Republic from John F. Kennedy International Airport. The jet twice ran into the wake of a Boeing 747 five miles ahead of it, according to the NTSB.

The rudder began to swing back and forth violently. Seven seconds later, the tail fin, which was made of a nonmetallic composite, started to break off. The plane plunged into a residential neighborhood.

It was the first time the NTSB was aware of the in-flight failure of an aircraft's major structural component made of composite materials.

Investigators have learned since the accident that sharp rudder actions can put sufficient stress on the tail fin to cause it to snap off.

In addition, the NTSB found that very slight pressure on the rudder pedal can cause severe rudder movements when flying at high speeds, which pilots may not have been aware of. Rudders help to keep a plane on course during landing or taking off in crosswinds and in case of engine failure; they're rarely used at higher speeds in flight.

The safety board urged the Federal Aviation Administration in February to make sure pilots are trained that moving the rudder back and forth may be dangerous even at low speeds previously thought to have been safe.

The FAA agreed to the recommendation.

Carol Carmody, the safety board's acting chairwoman, said investigators are focusing on what caused the rudder's movements and why the tail sheared off.

The board will try to determine: