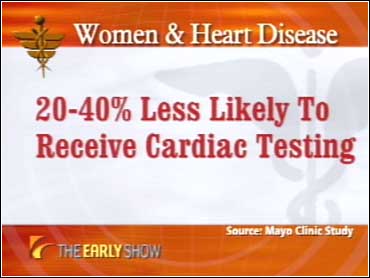 Heart disease often affects women and men in different ways, and women are at a bigger risk than many realize.

According to The Early Show medical correspondent Dr. Emily Senay, heart disease is an "extremely big" problem — women are more likely than men to die of heart disease.

"According to the National Institute of Health, heart disease is the leading cause of death among women," she said. "One reason many women are not aware of that is that cardiovascular disease tends to strike women later in life. Men tend to have heart attacks at earlier ages. And the shock of a relatively young man being stricken is undeniable. But later in life, coronary artery disease is increasingly a women's problem."

Dr. Senay said that menopause is the time women should start thinking about their risk for heart disease. She said statistics show that the rates doubled or tripped for women after "the change" and the average age a woman gets a heart attack is 70.

Making matters worse for women is the fact that their heart attack symptoms are not as obvious as men's.

"There are women whose coronary arteries do not show evidence of severe blockages during standard angiograms," Dr. Senay said. "But researchers say their hearts may be at risk anyway."

"So when women have chest pains and their angiograms come back negative, cardiologists are realizing more and more that severe heart disease may still be present," Dr. Senay said.

When a woman is younger, Dr. Senay said that she should partake in physical activity to stave of heart disease.

"It's estimated that as early as age 15, 28 percent of girls who are white, and 58 percent of African-American young women, do not have a leisure time activity that involves exercise," she said. And young women who smoke are also setting the stage for higher heart risk.

As women start to age, Dr. Senay said they need to monitor their weight, blood pressure and cholesterol.

"We need to eat right, and get enough exercise, and get our heart health checked regularly," she said. "It's all part of keeping in mind, and constantly reminding ourselves, that heart disease is a woman's disease."