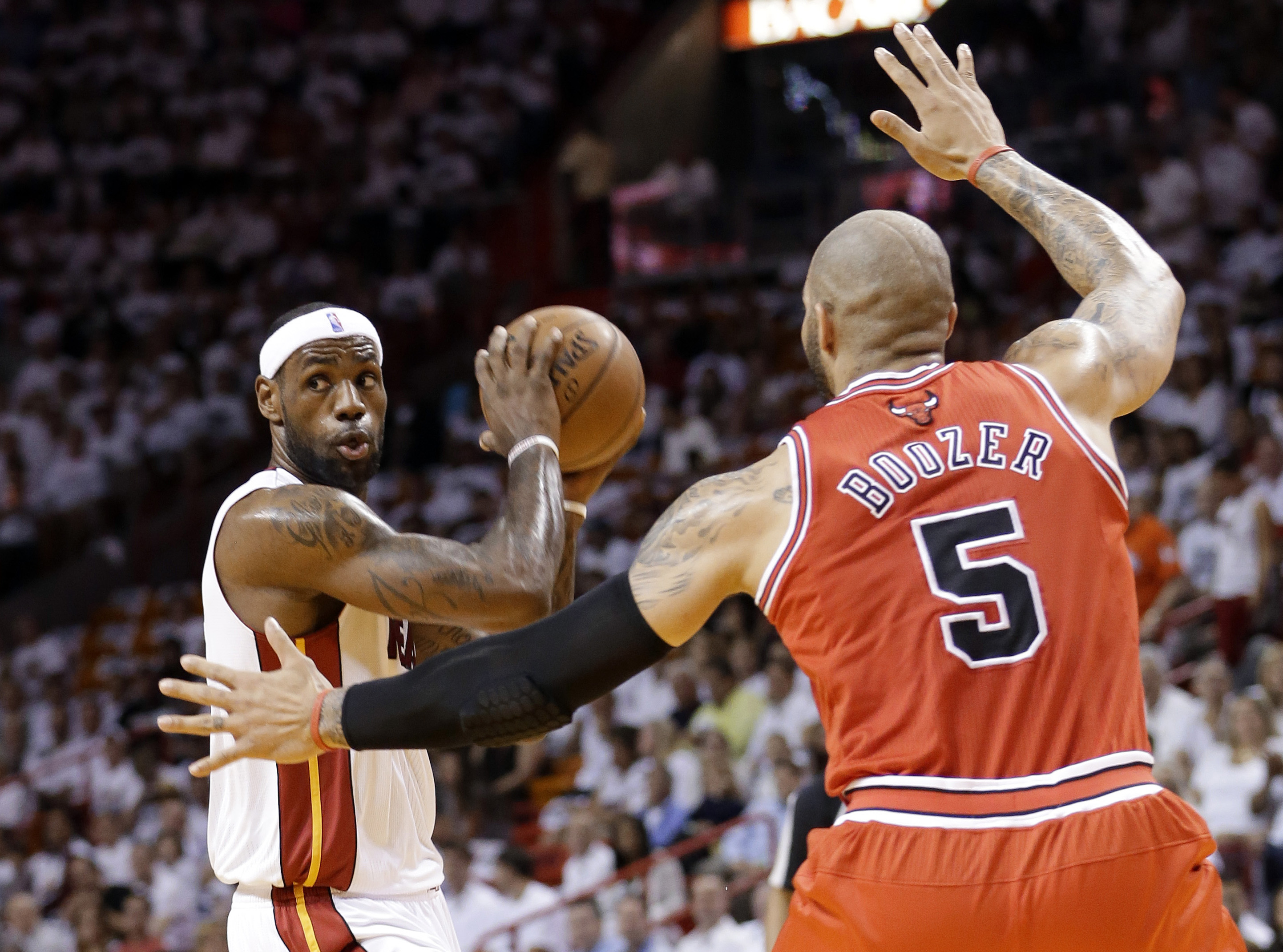 MIAMI Knowing his team needed him at his best, Dwyane Wade retreated to the Miami Heat locker room after the third quarter for some quick treatment on his aching right knee.

When he came back, he was good as new.

And now he can rest until the Eastern Conference finals.

LeBron James scored 23 points, Wade added 18 and had a brilliant 45-second sequence that proved crucial, and the Heat clawed back from an 11-point second-half deficit to beat the Chicago Bulls 94-91 on Wednesday night and close out their second-round series in five games. The Heat outscored Chicago 25-14 in the fourth quarter to escape and advance.

"I knew the fourth quarter was going to be tough so I wanted to re-tape my knee," said Wade, who has been battling bone bruises on his knee for several weeks. "I knew I was going to come back into a grind. Our trainers did a great job of getting it taped it enough so I could come out and play."

Wade had a blocked shot, defensive rebound, offensive rebound and putback slam — all in a late 45-second span — to help cap a wild night of wild comebacks. The Heat blew an early 18-point lead, then pulled off a late rally to finish off the depleted Bulls, who still had two chances on their last possession to force overtime.

But Nate Robinson and Jimmy Butler missed 3-pointers, time expired, and Miami moved on to face Indiana or New York next week.

"Dwyane is uncanny," Heat coach Erik Spoelstra said. "When the competition is at its highest, and its fiercest, he finds a way."

Carlos Boozer finished with 26 points and 14 rebounds for the Bulls, who were without Derrick Rose for the 99th straight game, as well as Kirk Hinrich (calf) and Luol Deng (illness). Robinson scored 21 points, Butler had 19, and Richard Hamilton 15 for the Bulls, who dropped the final four games of the series.

"Obviously we're disappointed in losing the series," Bulls coach Tom Thibodeau said. "But I was never disappointed in our team. I thought our team fought hard all year long. There was no quit in them."

True — all the way to the end.

A team that played without the 2011 NBA MVP in Rose, and dealt with a slew of other issues along the way, was within a couple shots from forcing the reigning champions to fly back to Chicago for a Game 6 on Friday night.

Shane Battier opened the fourth quarter with a 3-pointer to get Miami within five. Another 3-pointer from Battier — over Boozer, his fellow Duke alum — came not long afterward, and he connected on a pair of free throws after being fouled on a 3-point try to cut Chicago's lead to 81-79.

Norris Cole had a pair of baskets, the second being a left-handed driving dunk, to put Miami on top, and the Heat found a way to close it out from there, even though it wasn't easy, by any measure.

Robinson's 3-pointer with 1:43 left got the Bulls to 94-91. No one scored again, even though there were plenty of chances both ways.

When it was finally over, the Heat lingered on the court in celebration. Wade held on to the game ball as he shook a few fans' hands, and he, James and Bosh exchanged some high-fives — the last three Miami players to leave the floor.

"I had a good couple of minutes," Wade said. "I knew they've seen a lot of LeBron and Norris. I knew they weren't prepared for me to attack which is what I was able to do."

Miami will open the East finals at home next week, and it'll be a playoff rematch from its march to the title last season. If Indiana beats New York — the Pacers lead that series 3-1 — on Thursday night, then the Heat and Pacers will meet in Game 1 in Miami on Monday night. If the Knicks extend the Pacers to at least six games, then the East finals would open Wednesday night, regardless of opponent.

The Heat will almost surely be big favorites against either Indiana or New York, though it's certain either opponent would enter a series against Miami with plenty of confidence. The Knicks went 3-1 against the Heat this season, outscoring them by 11.5 points per game and winning both of their games at Miami convincingly. The Pacers went 2-1 against the Heat, winning twice in Indianapolis and losing their lone game in Miami.

To put that in some more perspective, the Heat went 2-5 against the Knicks and Pacers, and are now 72-12 against all other NBA clubs this season.

"It only gets more difficult and more challenging," Spoelstra said. "That's what competitors want."

Then again, given how Miami has played over the last 3-and-a-half months, the notion of the Heat losing to anybody four times might seem downright impossible. The Heat lost at Indiana on Feb. 1. They won at Toronto two days later, the first victory in what became a run of 27 straight wins — and the start of a stretch that has seen Miami go 45-3 in its last 48 games.

More than half the league — 17 of the other 29 teams — didn't win 45 games, total, this season, even including playoffs.

No one would have thought the ending would be so exciting after the way this one started.

Marco Belinelli took the Bulls' first shot, a woefully short airball. Joakim Noah took their second shot, a very long airball. Their third possession was a turnover, and the night was shaping up like a Chicago disaster.

It was 10-0 before half the crowd was in their seats, and 22-4 just past the midpoint of the opening quarter. Since the start of Game 4, in barely over 53 minutes of play, the Heat had outscored the Bulls by 40 points. Everyone in the building — except for the 20 or so guys in red uniforms or wearing suits on the Chicago bench — had to be thinking that the series was over.

If so, then they were all wrong.

Game 5 turned into a microcosm of the Bulls' season. They were unfazed, unflappable, unrelenting in the face of being counted out.

And before long, the massive deficit was a thing of the past.

Boozer went 6 for 7 in the opening quarter, his layup late in the period getting the Bulls within seven before James scored to end the first and give Miami a 30-21 lead. The Bulls were unbothered, and just kept getting stops on one end, making baskets on the other. Butler's 3-pointer with 4:46 left in the half gave Chicago its first advantage of the night, 38-36.

To recap, the game started with a 22-4 Heat run — and in the 13 minutes that immediately followed, the Bulls rebutted with a 34-14 burst.

"We grinded it out," Boozer said. "We had chances. We just fell a little bit short."

And Miami moved on, now halfway home in its quest for a second straight title.

NOTES: Miami is 6-0 in its last six chances to close out a series. ... The Bulls had 16 turnovers, which Miami turned into 27 points. ... Hinrich's calf injury was improving, the Bulls said, but not to the point where he could play.