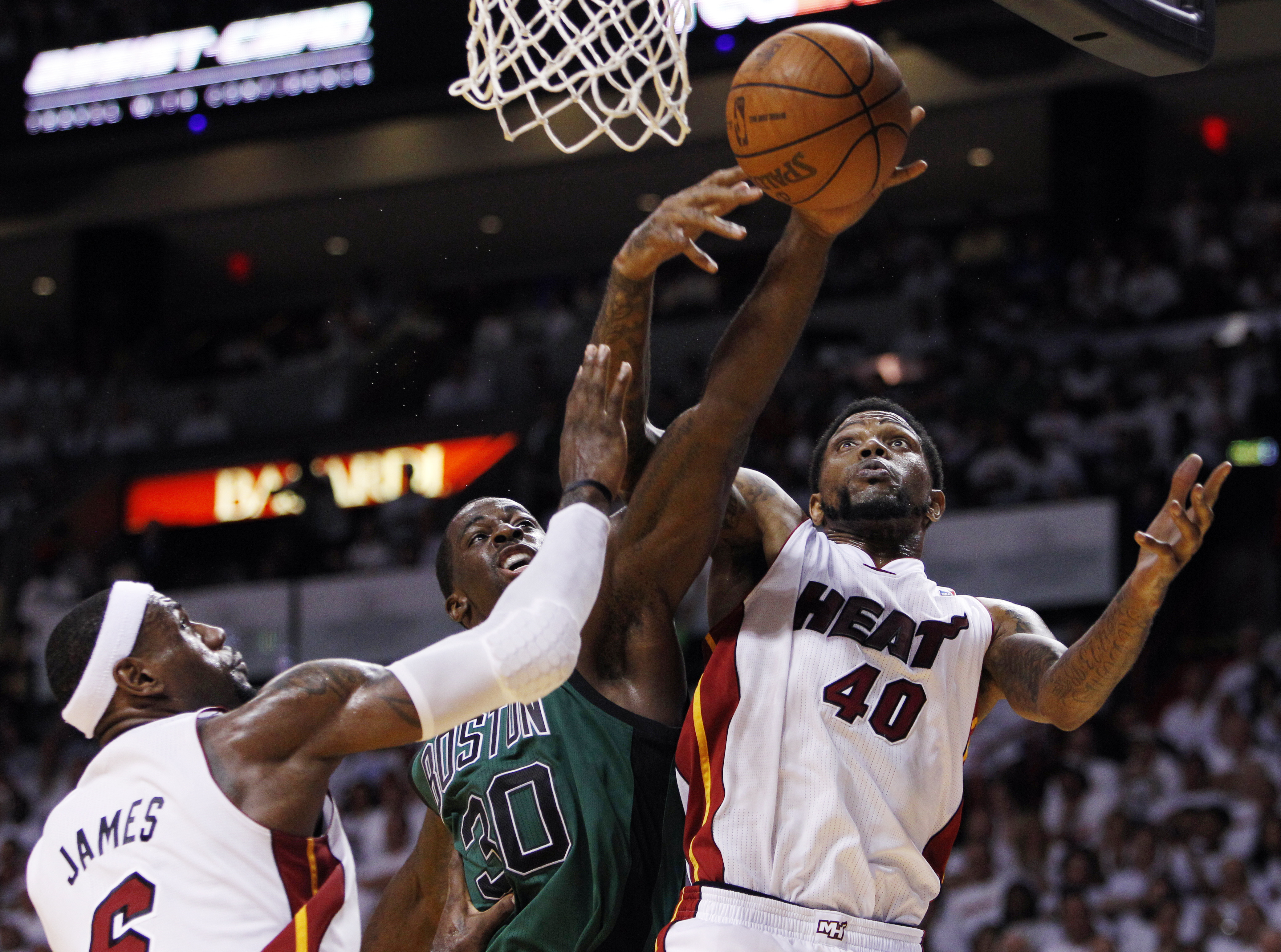 (CBS/AP) MIAMI - Back and forth they went in overtime, Rajon Rondo and the Miami Heat.

Rondo scored. The Heat answered. Then again. And again.

Eventually, Rondo missed, one of the rare times he didn't deliver on an unforgettable night. Moments later, the Heat took the lead for good, finally able to close out a wild Game 2 of the Eastern Conference finals.

LeBron James scored 34 points and grabbed 10 rebounds, Dwyane Wade scored eight of his 23 points in the extra session and the Heat rallied from 15 down to beat the Boston Celtics 115-111 on Wednesday night — taking a 2-0 lead in the series by pulling off the biggest comeback in franchise postseason history.

"One of the best games I've played in, win or lose," Heat forward Shane Battier said. "It's easier said when you win — but it's unbelievable."

Rondo scored all 12 of Boston's points in overtime, capping a 44-point, 10-assist, eight-rebound effort in which he played every second of a 53-minute game. The Heat expected Boston's best — and the Celtics didn't disappoint, yet still head home for Game 3 on Friday night facing a deficit no Boston team has rallied from to win a series since 1969.

"Listen, we played terrific," Celtics coach Doc Rivers said. "I told them, we played extremely hard. I thought we played with great heart tonight, but I didn't think we played smart all the time. And there's things we can absolutely fix, and we'll do that. We'll be ready for Friday."

CBSSports.com's Ken Berger says the Celtics must "bring the same kind of suffocating halfcourt defense to Boston, and hope Rondo can somehow sustain the incomparable energy and sheer will he exerted on the Heat for at least two more games. If not, the Celtics face the cruelest of endings to their run of success since GM Danny Ainge united three Hall of Famers with a stubborn but talented point guard five years ago."

"This group had resolve," Wade said of the Celtics. "They came out and played a great game. It was physical early. They brought the game to us. That can't happen. We used our crowd and the energy to get back into the game and we had to play better."

"He showed why he's one of the best point guards in this league," Chalmers said.

Rondo shrugged off his night.

Allen's 3-pointer with 34.3 seconds left tied the game at 99-all. James missed two shots, first a layup — he got the rebound of his own miss — and then a jumper on the final possession of regulation, and to overtime they went.

"We had to do it the tough way," Heat coach Erik Spoelstra said.

The Heat had come back to win from 14 points down in playoff games twice before, first in Game 6 of the 2006 NBA finals — their title clincher — and again last season against Philadelphia.

And this one was slipping away, more than once. James missed two free throws 21 seconds into overtime, and Miami looked in trouble, especially since Rondo was simply taking over.

When Rondo missed a layup — he thought he was fouled, and the Celtics agreed — with 1:33 left, Miami took advantage, with Udonis Haslem getting a dunk to put the Heat up 105-103. And after a turnover on the next Boston possession, Wade drove the lane, hit the deck and watched as his layup bounced on the rim and dropped through.

Garnett stood over Wade and glared, to no avail. Wade hit the free throw, and Miami was up 110-105 with 59.7 seconds left. By then, the no-call on Rondo had the Celtics seething.

"It was obvious," Rondo said.

Added Allen: "We all thought he got hit. I'll say it. He did, but what can you do about it?"

Miami was down by 15 in the first half and by as many as 11 in the third quarter, before a pair of 3-pointers by James started a comeback. Wade made consecutive jumpers midway through the third to shake off a slow start to his night and get the Heat within three both times, and the 2006 NBA finals MVP set up Haslem for a three-point play with 2:55 left that gave Miami its first lead since the opening minutes, 73-71.

Miami's lead got to as much as seven in the third after James blocked Pierce's shot near the rim, sending the ball high into the air and starting a sequence that was capped by a three-point play from Wade, pushing the margin to 78-71. It capped a 12-0 run for the Heat, who took an 81-75 lead into the fourth.

It was the fifth straight game where Miami outscored its opponent by double-digits in the third quarter. In each of the previous four of those outings, Miami never trailed in the final period.

That streak ended in this one.

They weren't out of it — but a call that Boston argued against played a big role in the Celtics getting the lead back.

James stole the ball from Rondo early in the fourth, drove down the court and got wrapped up by Pietrus, who was assessed a clear-path foul, meaning Miami got two free throws and the ball. James missed both foul shots, Mike Miller missed a 3-pointer later in the possession, and the lead stayed at 85-81.

Barely a minute later, it was gone. Pietrus hit a 3-pointer, Rondo followed with a steal and layup and Boston led 86-85. The Celtics led by five with 3:50 left after a jumper by Pierce, and the Celtics looked to be in control.

It was temporary. The Heat scored the next nine points, Haslem's jumper with 1:08 remaining put Miami up 98-94. So of course, back came Boston — Allen's 3-pointer tying the game a few moments after Pierce fouled out.

"Rondo was absolutely amazing," James said. "The performance he put on tonight will go down in the record books. ... It was a battle, and we never felt like we won the game or lost the game when there were zeros on the clock."

NOTES: Celebrities in attendance included UCLA coach Ben Howland, rapper Flo Rida and former Dolphins quarterback Dan Marino, a regular in the Heat crowd. ... Celtics F Greg Stiemsma had four fouls in the first quarter, the first NBA player to do that since 2009. ... Rondo's only other 22-point first half was Feb. 22, 2009 at Phoenix. ... Allen, considered one of the game's absolute best shooters for many years, said he's been getting plenty of unsolicited advice lately on how to get rolling again. "I've only been doing this for 20 years," Allen said at the morning shootaround. ... Haslem (6) had more rebounds than Boston (5) in the third quarter. ... Heat C Ronny Turiaf started, played the first 4:51 and did not return. Joel Anthony started the second half in Turiaf's place.