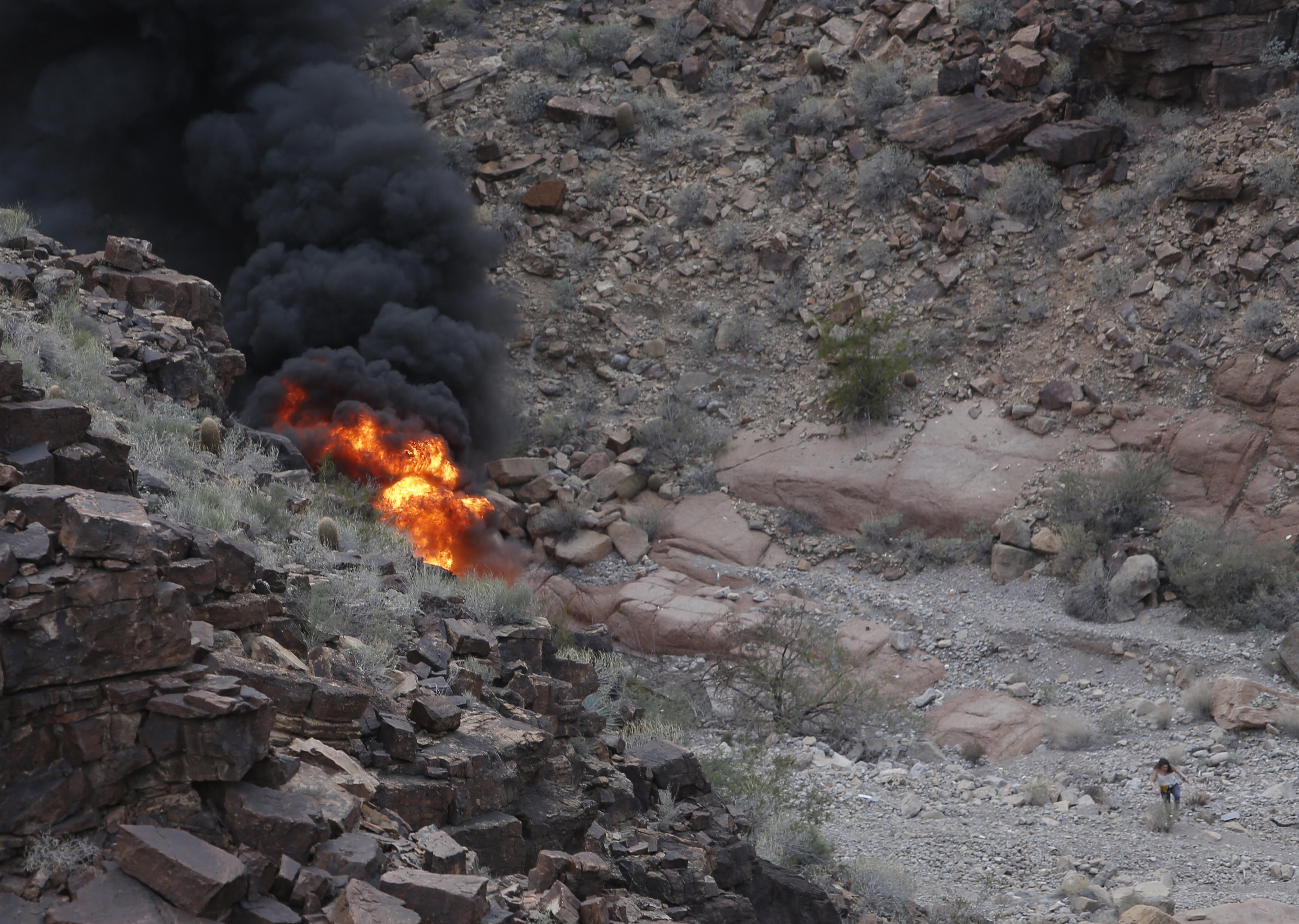 PHOENIX -- Three British people who died in a helicopter crash at the Grand Canyon were in the American Southwest to celebrate one of their birthdays, a trip they had been looking forward to for a long time, family and friends said. They were identified early Monday as veterinary receptionist Becky Dobson, 27; her boyfriend, Stuart Hill, 30; and his brother, Jason Hill, 32. Dobson's father, Peter Dobson, told Britain's Press Association news agency that the three were staying in Las Vegas for a long weekend.

From there, they took a helicopter to the west rim of the Grand Canyon where it crashed under unknown circumstances Saturday evening on the Hualapai reservation outside the boundaries of Grand Canyon National Park. The three died and four others, including the pilot, were injured.

Peter Dobson said his daughter and Stuart Hill "were really happy together" and they were celebrating his birthday with a group of friends.

"They were always going out and doing things, just enjoyed being with each other," he said. "The whole thing is just terrible."

The group was traveling aboard a Papillon Grand Canyon Helicopters chopper near Quartermaster Canyon. Crews tackled difficult terrain in a remote area to try to recover the victims' bodies.

A witness said he saw flames and black smoke spewing from the crash site, heard explosions and saw victims who were bleeding and badly burned.

"It's just horrible," witness Teddy Fujimoto said. "And those victims -- she was so badly burned. It's unimaginable, the pain."

Windy conditions, darkness and the rugged terrain made it difficult to reach the helicopter's wreckage, Hualapai Nation police Chief Francis Bradley said. Rescue crews had to fly in, walk to the crash site and use night vision goggles to find their way around, he said.

The survivors were airlifted to a Las Vegas hospital by around 2 a.m. Sunday, Bradley said. All six passengers were from the United Kingdom, the British Foreign and Commonwealth Office confirmed.

National Transportation Safety Board officials are expected at the crash scene to investigate what caused the chopper to go down, Bradley said. The Federal Aviation Administration also will be investigating the crash of the Eurocopter EC130, spokesman Allen Kenitzer said.

National Weather Service meteorologists in Flagstaff and Phoenix said winds were blowing an estimated 10 mph with gusts of 20 mph around the time of the crash.

Fujimoto, a Las Vegas photographer who was doing a wedding shoot at the time of the crash, said he suddenly saw people running toward the edge of a gulch. He said he heard gasps and went to check out the commotion coming from about 600 feet below.

"In the gulch, there was a helicopter, flames, smoke," he said. "It was horrible."

He said that's when two or three small explosions went off in the wreckage and people weren't sure what to do. He said some other pilots flying helicopters in the area at the time of the crash descended into the gulch and delivered water and first aid supplies.

Fujimoto said he saw two badly injured women and one of them was yelling out a man's name. He said one of them "was pretty much burned all over."

"Her hands were bloody and body was just more burned," Fujimoto said.

The other woman, he said, was "covered in blood" and was bleeding from her head or neck.

Fujimoto said he has taken helicopter rides for photo shoots for the past few years and generally felt safe. He said the crash aftermath is the worst thing he's ever witnessed.

The tour company promised full cooperation with crash investigators and offered its sympathy.

"It is with extreme sadness we extend our heartfelt sympathy to the families involved in this accident," Papillon Group CEO Brenda Halvorson said in a statement. "Our top priority is the care and needs of our passengers and our staff."

The Nevada-based company's website says it flies roughly 600,000 passengers a year around the Grand Canyon and on other tours. It notes that it "abides by flight safety rules and regulations that substantially exceed the regulations required by the Federal Aviation Administration."

In August 2001, a Grand Canyon tour helicopter operated by Papillon crashed and burned near Meadview, Arizona. The pilot and five passengers died. An NTSB report issued in 2004 blamed the pilot's decision to descend too fast and too close to the scenic Grand Wash Cliffs.