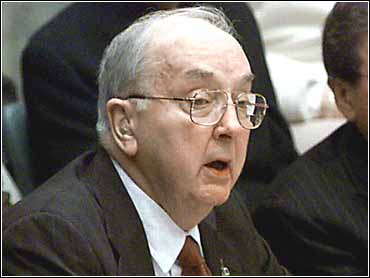 Sen. Jesse Helms, perhaps the United States' most famous conservative, said Wednesday he would retire at the end of his fifth term.

Helms announced Tuesday evening he will not seek a sixth term. His Senate term ends in January 2003. Helms has been active in North Carolina politics since he worked to elect segregationist Willis Smith to the Senate in 1950 and was for a time Smith's top aide.

"You see, if my health continues to be good when my present fifth term ends in 2002, I will be 81 years old. I will then have served 30 years as a Senator from North Carolina," Helms said in his address.

Helms announced the decision in taped remarks on Raleigh's WRAL-TV, where he became a household name across much of North Carolina with his editorials in the 1960s and 1970s condemning civil rights marchers and communist dictators.

"I thank you most sincerely from the bottom of my heart for letting me have my say," Helms said.

Helms taped the address several hours earlier, before an invitation-only group of friends and family. He then headed to his vacation home on Lake Gaston, north of Raleigh, to watch the broadcast with his wife, Dorothy.

Age and health concerns had raised questions for months about whether the 79-year-old senator would run for re-election. A former Democrat who became known in his tobacco-farming state as a radio talk-show host, Helms was first elected to the Senate in 1972.

The power shift in the Senate may also have played a part in his decision.

Helms was replaced as head of the Foreign Relations Committee by Democratic Sen. Joseph Biden of Delaware in June after the political reshuffle sparked by Vermont Sen. James Jeffords' decision to leave the Republican Party and become an independent.

That left the Senate divided 50-49-1, in the Democrats' favor, giving them the right to chair committees.

Helms' departure will clear the way for failed presidential candidate Elizabeth Dole to seek the GOP nomination, a move sources said they expect Dole would make. Republican officials were hoping to avoid a nasty primary fight between Dole and formeSen. Lauch Faircloth, who was defeated in 1998 by Democrat John Edwards.

Thad Beyle, a political science professor at the University of North Carolina at Chapel Hill, said national GOP officials clearly see Dole as the best means to retain Helms' seat. Faircloth might besitate to challenge her and butt heads with the national party establishment, he said.

"I think there are some who will not jump back in," Beyle said.

So far, the only Democrat to enter the race is Secretary of State Elaine Marshall. There is speculation that Democrats will ask former four-term Gov. Jim Hunt to run.

A lifelong conservative Democrat, Helms switched parties in 1970 and was elected to the Senate in 1972 in the GOP sweep led by Richard Nixon.

In the Senate, Helms has been a staunch opponent of communist regimes and critic of foreign aid and used the chairmanship of the Senate Foreign Relations Committee, which he held from 1995 until this year, to promote his views, often blocking key appointments and frustrating political adversaries.

© MMI, CBS Worldwide Inc. All Rights Reserved. This material may not be published, broadcast, rewritten, or redistributed. The Associated Press and Reuters contributed to this report