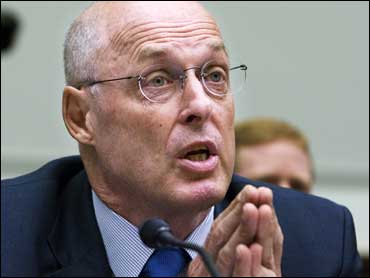 This column was written by William Greider.

The financial bloodbath will continue, but now Henry Paulson gets to decide who lives and who dies. The former investment banker from Goldman Sachs will be empowered as Treasury Secretary to play savior or grim reaper, the liquidator who essentially pulls the plug on some banks and financial firms or the man who rescues them from ruin. Of course, Paulson will consult with other government officials. But you can be sure that, behind the door, he will ask former brethren in Wall Street to help decide which club members are worthy of being saved. This power to pick winners and losers will remain in Paulson's hands until a new president arrives in January.

This the essence of "the deal" Congress worked out over the weekend (and is in the process of enacting today). Some bells and whistles were added to make the transaction less obnoxious to public opinion, voters and taxpayers. They are not meaningless, but both parties lacked the nerve to tamper with Paulson's basic proposal. This is still a massive bailout of imploding Wall Street, financed with the public's money. And it is still a massive crap shoot for the American people.

If the billions from Washington somehow restore temporary calm and balance to global financial institutions and markets, then the usual cheerleaders will proclaim the "system" has worked. Most Americans, I predict, will not join the cheering. Too much destruction lies ahead, both in the financial system and in the real economy where people live and work. Too much bitterness and rage will be attached to the White Knight at Treasury when he dooms one pension fund or bank, but rescues others. Too much deceptive sleight-of-hand is already embedded in Paulson's approach for ordinary mortals even to recognize what Paulson intends to accomplish.

The essential political failure, in my view, is that Congress did not step up and assert the full emergency powers of government in this epic crisis, that is, take temporary control of the entire financial and banking system so regulators and policy makers can steer the US economy to safer ground, compelling the private institutions to follow their lead. This rescue plan remains essentially voluntary. Yes, the Treasury Secretary has been awarded gargantuan personal powers, but there is not much in writing to compel the banking behavior of private interests he chooses to rescue them. One assumes Paulson will demand some private deals and use his enormous leverage to squeeze anyone who resists. But there is nothing to guarantee this path is taken. The bailout belongs to the club and they will manage it.

Democrats are the majority party and insisted on some qualifying terms in behalf of the populace--better than nothing, but weak half-steps. The government can claim warrants or equity ownership from firms in exchange for the public aid. It can put a lid on bloated executive salaries at the rescued banks or brokerages. It can demand more up-close oversight of how the Treasury Secretary performs. The language for all of these measures suggests to me--I need to read the text again more carefully--that these are essentially discretionary suggestions.

Paulson can do them if he chooses. Or, if he likes, he can wiggle around them in the fine print. The Dems do want to assert real control over Paulson's decisions for fear they will then be blamed if and when everything fails.

Republicans, as usual, are playing their own political game--trying to evade the blame, now and later. Their proposal for an insurance program that financial firms must pay for is ludicrous. It's like trying to buy hurricane insurance on your house after the storm has already blown it away. But the GOP is already in ruin, so its members are thinking long-term survival and creating a predicate for revival. Blame the government, blame the Dems, blame Wall Street.

Democrats are still in recovery from twenty-five years of deferring impotently to the wise men of Wall Street and retreating tactically from conservative initiatives. I see this crisis as the Democrats' hesitant first step toward rediscovering their nerve and abandoned convictions. They are not there yet. But this crisis is not over. I predict they will get another opportunity to stand up for something and rather soon.
In the nature of this crisis, the next president will be compelled to clean up Paulson's irregular mess. He will be forced to act, not only because of the rising popular anger and enveloping recession but because the Paulson approach is founded on private deal-making and his deceptive statements of purpose.

By January, whoever wins the White House, it will be clear that Washington cannot cure the disease by relying one smart guy from Wall Street. A new federal agency will be needed to supervise the bailout and restore defined public purposes and enforce them on the system. The government will have to assert its powers forcefully because by then it will be obvious the "voluntary" approach helped some losers to become winners, but it neglected to save the country.
By William Greider
Reprinted with permission from The Nation