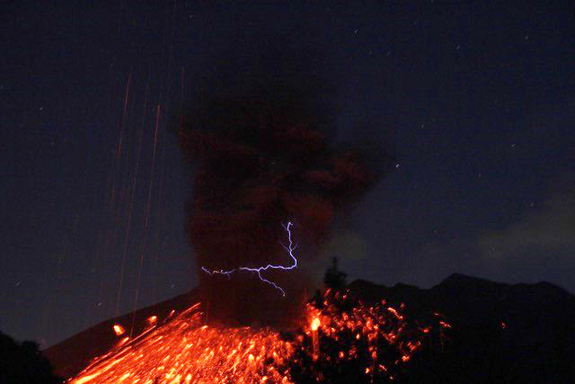 At nighttime, ominous lightning flashes above erupting volcanoes light up the sky like a living nightmare. Now, scientists are closer to understanding volcanic lightning, which stems from both ash and ice, two new studies reveal.

Unraveling the origin of volcanic lightning has been difficult. In thunderstorms, the culprits are colliding ice crystals, which generate enough of an electric charge to trigger lightning. But ash clouds are less predictable and harder to study than supercells (thunderstorms), so scientists are still trying to figure out what sets off volcanic lightning. For instance, it seems absurd to blame ice for lightning in a volcanic inferno.

Two new studies reveal different reasons for lightning above erupting volcanoes. One cause is static electricity, from particles rubbing together in dense ash clouds near the ground. The other source of lightning happens near the stratosphere, high above the Earth's surface, where jockeying ice crystals unleash powerful jolts. [Images: Grimsvotn Volcano Puts on Lightning Show]

At Sakurajima volcano in Japan, ash particles are responsible for lightning that strikes near the ground, researchers led by Corrado Cimarelli, a volcanologist at Ludwig Maximilian University in Munich, Germany, reported Feb. 23 in the journalGeophysical Research Letters. For that study, the scientists recorded video of volcanic lightning at Sakurajima, one of the world's most active volcanoes. By comparing the video to infrasound and electromagnetic data, the researchers discovered thick clouds of ash give rise to static electricity. The particles rub together and the resulting charge buildup generates lightning strikes. (This is called triboelectricity.)

Ice also plays a role in volcanic lightning, a separate study found. Researchers tracked the location of lightning strikes during an April 2015 eruption of Calbuco volcano in Chile. In this case, the bolts were breaking some 60 miles (about 100 kilometers) from the eruption, and at near-stratospheric heights of about 12 miles (20 km) above Earth's surface. The scientists think ice formed in the top of the thinning ash cloud -- which was also carrying water vapor -- producing lightning like a thundercloud does. The study was published April 12 in Geophysical Research Letters.

These discoveries could have important implications for volcano monitoring. Because larger eruptions trigger more lightning, "simply seeing that lightning is associated with an eruption tells you that there are potential aviation issues, and it informs the way you respond to a volcano," said Alexa Van Eaton, lead author of the Calbuco study and a volcanologist at the U.S. Geological Survey Cascades Volcano Observatory in Vancouver, Washington.

During the March eruption of Alaska's Pavlof volcano, Van Eaton and her colleagues used the World Wide Lightning Location network to monitor the volcano's ash cloud, she said. The ash from Pavlof and other southwest Alaska volcanoes can drift into international and local flight paths.

Both studies also bring scientists closer solving the mystery of volcanic lighting. "It's surprising that there are really different processes inside a volcanic eruption plume system that generate electrification," van Eaton said. "It opens a world of questions that we didn't even know existed."