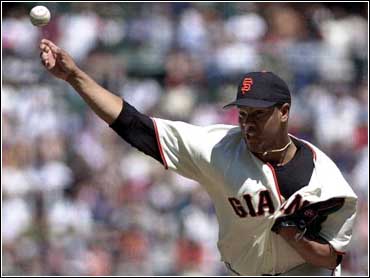 Livan Hernandez liked his first shutout so much, he did it again.

Hernandez, who had never thrown a shutout in 104 major league starts before last week, pitched his second straight four-hitter, leading the San Francisco Giants over the Florida Marlins 5-0 Wednesday.

"This is the best time in my career," said Hernandez, the 1997 World Series MVP. "I'd never thrown a shutout before, but after the first one, it made me more comfortable today. Sometimes, I can throw good."

Hernandez (13-9) is 13-5 with a 3.25 ERA since an 0-4 start and has allowed three runs in his last 34 innings. He struck out five and walked three in his fourth complete game of the season, stretching his shutout string to 18 innings.

"He makes my job so much easier, and it makes it fun to set up hitters," said Giants' catcher Bobby Estalella, who has caught all of Hernandez's starts this year. "We didn't stay in any set pattern with anybody. We seem to be in the same tempo. When he gets the ball, he wants to go."

Before beating Atlanta 2-0 last Friday, Hernandez had taken shutouts into the eighth inning five times this season and had taken three into the ninth.

"He wasn't messing around with us," Florida's Mark Redmond said. "He's not trying to trick hitters any more, he's pitching."

The previous Giants pitcher to throw consecutive shutouts was Bud Black on May 5 and 10, 1991, both against Dwight Gooden and the New York Mets.

"We were nevevery comfortable against Livan," Marlins manager John Boles said. "He fooled us all day. He tied us up in knots with a variety of pitches. His location was pinpoint."

Barry Bonds also homered and drive in two runs as the Giants won for the eighth time in 10 games and improved to 43-20 at home.

"We just want to win; it doesn't matter where," Bonds said.

Chuck Smith (2-5) gave up four runs and six hits in seven innings as Florida lost for the fourth time in five games.

Burks drove in the Giants' first three runs. Jeff Kent singled to open the second, stole second and third and came home on Burks' sacrifice fly. Then Burks homered in the fourth following Kent's one-out single and a forceout.

"The man is hot," Bonds said. "Don't touch him, you might burn yourself. He's one of our best players."

Bonds had an RBI single in the fifth and led off the eighth with his 38th homer, a drive off Manny Aybar.

Florida, which didn't move a runner past second base in the first seven innings, got Luis Castillo to third with two outs in the eighth, but Hernandez struck out Preston Wilson.

Wilson has struck out 160 times in 126 games and is on pace to set a major league season record.