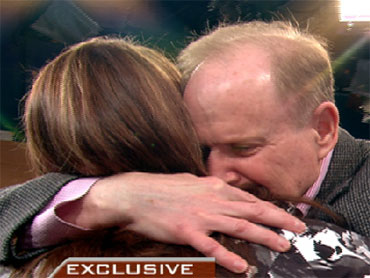 There was nary a dry eye in the house on "The Early Show" Thursday when an AT&T customer service representative being credited with saving the life of an Illinois man surprised him by walking out onto the set as he was being interviewed.

Ron Zivin, 60, of Morton Grove, was shoveling snow for his mother on Feb. 2 when he started having chest pains and other symptoms of possible heart trouble.

Not only didn't Zivin react to them, he called AT&T to discuss his account! During the call, he mentioned his symptoms to customer service representative Kelly Hart.

When Zivin suddenly fell silent, having passed out, Hart realized something must be terribly amiss and called 911.

Zivin wound up having stents inserted. Doctors told him he probably would have died within days without medical attention.

As Zivin was telling his story to co-anchor Harry Smith, Hart shocked Zivin by showing up.

The two embraced warmly, at length. Zivin was crying. Hart was teary-eyed.

Upon seeing Hart Thursday, Zivin summed it all up when he said, "Thank God for her!"

He admitted he was "in total denial" when he didn't seek medical attention to begin with - especially since he's volunteered in emergency rooms and seen people die who'd had similar symptoms.

Zivin added that he's "been with AT&T for a long time and I've always liked their service, but I never expected (something like this!)"