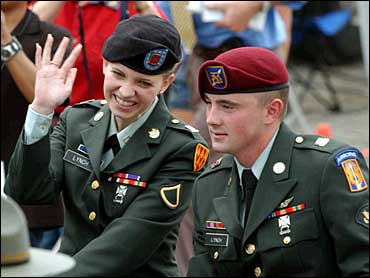 Former POW Jessica Lynch returned home to a flag-waving hero's welcome Tuesday, and in her first public words since her rescue said: "It's great to be home."

"I'd like to say thank you to everyone who helped and prayed for my return," said Lynch, who was brought to the podium in a wheelchair wearing a beret and green Army dress uniform.

Lynch received a standing ovation as she entered a media tent and made her brief remarks against the backdrop of a large American flag. Outside, friends and family waved flags and "Welcome Home Jessica" signs, while a marching band warmed up for a parade trumpeting Lynch's return home.

The 20-year-old former POW said she did not realize for "a long time" that her ordeal had captured the hearts of millions around the globe.

"But I'm beginning to understand because I've read thousands of cards and letters — many of them from children — that offer messages of hope and faith," she said.

Lynch said she had read "thousands of stories" recounting that when she was rescued, she told U.S. Special Forces that she was an American soldier.

"Those stories were right. Those were my words. I'm an American soldier, too," she said.

Lynch's 507th Maintenance Company convoy was ambushed March 23 near the Iraqi city of Nasiriyah in an attack that killed 11 soldiers. U.S. forces rescued Lynch at a Nasiriyah hospital April 1, while five other captured 507th soldiers, held apart from Lynch, were released April 13.

Lynch's rescue quickly made an American hero out of the petite blonde who joined the Army to get an education and become a kindergarten teacher.

Lynch also said she was "thankful to several Iraqi citizens who helped save my life while I was in their hospital."

CBS News Correspondent Jane Clayson reports Lynch said she was happy to hear some of her unit made it home alive, and pained to learn some of them didn't. She made a special mention of a fellow female soldier.

Lynch said she missed Pfc. Lori Piestewa 23, who was her roommate, best friend and a member of the 507th. Piestewa died of injuries suffered in the ambush.

"She fought beside me, and it was an honor to have served with her," Lynch said. "Lori will always remain in my heart."

Suffering from multiple broken bones and other injuries, she had arrived at Walter Reed in the nation's capital on April 12. Lynch is able to walk with the aid of a walker but still has trouble standing.

She spent more than 100 days at Walter Reed before she was released Tuesday morning. She boarded a Black Hawk helicopter for the trip to Wirt County and arrived in Elizabeth at 1:56 p.m.

After her remarks, Lynch rode in a convertible in a military motorcade through Elizabeth and then to her hometown of Palestine, a community of about 300 about five miles away.

The home was renovated to accommodate her during her recovery from the injuries she suffered in Iraq.

About 2,000 people lined the motorcade route along State Route 14 in hopes of catching a glimpse of Lynch.

"We are excited just to see her, just to be able to give her a hug," her grandmother Wyonema Lynch said earlier. "To Jessi, home is in the hills. She has been wanting to get here."

Lynch's cousin Dan Little, who has spoken twice with her in the past week, said Lynch's spirits have been buoyed by her imminent homecoming.

"She's a strong, disciplined young lady," Little said. "Her injuries are long healing, and that can be hard if you dwell on it. But she's not allowed that to happen."

Using 1,600 yards of donated lawn chair material, town workers hung hundreds of yellow bows along the motorcade route from Elizabeth to Palestine, about five miles away. By midmorning, seven dozen people gathered along the route to welcome Lynch home.

Some residents felt let down because Lynch's remarks were to be closed to the public.

"It's very disappointing but we hope eventually she will come out and do something for the community," said Tammy Simms of Elizabeth, whose daughter graduated from Wirt County High School with Lynch.

Hundreds of journalists were in this 1,000-person county seat to report Lynch's arrival. Officers with bomb-sniffing dogs swept the media tent at the park where Lynch was to speak.

On Monday, Lynch was awarded the Bronze Star, Purple Heart and Prisoner of War medals. The Bronze Star is given for meritorious combat service, a Purple Heart is most often awarded to those wounded in combat, and the POW for being held captive during wartime.

The following is the full text of Jessica Lynch's homecoming speech:

Hi. Thank you for being here. It's great to be home.

I would like to say thank you to everyone who hoped and prayed for my safe return. For a long time I had no idea so many people knew I'd been missing. But I read thousands of letters, many of them from children, who offered messages of hope and faith. I would like to thank the people in this community, especially those who gave donations to the Lynch fund and who volunteered their time and skills to work on my family's house.

Please allow me to thank the doctors, nurses and staff members of Walter Reed Army Medical Center for the excellent care they gave me. I would like to thank the staff of Landstuhl Medical Center in Germany for their care and support. I would like to thank the Fisher Foundation, Gov. Bob Wise and United States Senator Jay Rockefeller for the roles they played in helping my family to be with me in Germany and Washington. I'm also grateful to several Iraqi citizens who helped save my life while I was in their hospital. And then a unit of our Special Forces soldiers that saved my life.

I want to thank Sgt. Ruben Contreras. Ruben, you never let me give up. When I wanted to quit p-t (physical therapy), you kept me going. And you're my inspiration and I love you.

Thank you for this welcome and it's great to be home.