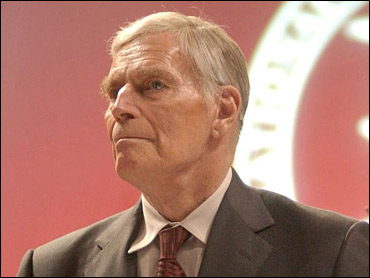 Charlton Heston made his last appearance as president of the National Rifle Association on Saturday, shuffling onto the stage before a crowd of 4,000 NRA members but too feeble to give a farewell speech.

The actor, diagnosed with symptoms of Alzheimer's disease, was strong enough to raise an 1866 Winchester rifle over his head and deliver his trademark line, "From my cold, dead hands."

He received a standing ovation but only spoke three more sentences at the annual NRA meeting Saturday.

"Thank you for everything, not only now but for all the years," Heston said. "It has been a wonderful run. I'm going to miss you."

Heston, 78, the public voice of the NRA for five years, was diagnosed last year with symptoms of Alzeheimer's, a neurological disease that can lead to dementia.

"Alzheimer's is a ravaging disease ... and Mr. Heston is suffering from those effects," said Marion Hammer, who was NRA president before Heston. "There are times, as is to be expected, when he isn't as sharp as he would like to be."

Heston's only speech before members of the gun-rights group was previously videotaped.

"When he's not feeling well, he prefers not to speak live and prefers to do it by video," Hammer said.

Heston left the NRA convention to return to California on Saturday, even though other board members weren't leaving the convention until Tuesday. He wasn't officially scheduled to step down from the presidency until Monday.

Kayne Robinson, former chairman of the Republican Party of Iowa, took over the duties of president on Saturday, including presenting Florida Gov. Jeb Bush with a flintlock rifle during a banquet. Heston was supposed to present Bush with the firearm.

"Were it not for your active involvement, it's safe to say my brother may not have been president of the United States," Bush said.

There were visible signs of the declining health of Heston, the actor who once played larger-than-life figures such as Moses, Judah Ben-Hur and El Cid in a half-century Hollywood career.

During the convention, a frail-looking Heston only made two public appearances, neither lasting more than a half-hour. He needed assistance walking across the stage during a tribute Friday night and during the annual meeting of members Saturday morning.

He required some prompting from executive vice president Wayne LaPierre during his appearances and often had a distant look in his eye.

"It becomes increasingly difficult for him to continue to be very public in terms of these types of events," LaPierre said.

"We were surprised he was able to attend this meeting," Hammer said.

Heston became NRA president in 1998 as the gun-rights group was overcoming a period of internal strife and facing run-ins with the administration of President Clinton. During his tenure, the NRA raised its membership to 4 million members. The group helped send a supportive President Bush to the White House and Republicans take control of Congress.

The NRA also pushed the U.S. House to pass legislation limiting lawsuits seeking damages against gun manufacturers and distributors this year and is gearing up to try and make sure a ban on assault weapons lapses next year in Congress.

Those issues were the focus of a protest that drew two dozen gun-control supporters outside the convention center where the NRA was meeting. The protest was organized by the Million Mom March, a gun-control group.

"We must expose the extremist agenda being discussed in this building behind us," said Mary Leigh Blek, director of the Million Mom March.

Before he left, Heston's wife, Lydia, spoke for him at the annual meeting of NRA members.

"Chuck has had a really gratifying experience," Lydia Heston said. "I want to thank you for what you've done for him, to give him this marvelous challenge, this great cause to work for. It has kept him alive."