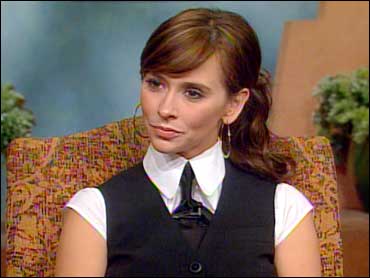 Hewitt is thrilled about the show's success.

"We feel lucky and even more scared this season than last," Hewitt told The Early Show's Harry Smith. "People are watching, so we want the show to be bigger and better. But we are really happy to be back. It's nice."

Hewitt, plays Melinda Gordon, a woman who is able to see and talk to dead people — earth-bound spirits who have yet to cross over to the other side and who seek her help in communicating and resolving unfinished business with the living.

The first season ended with a two-part cliffhanger: Melinda struggling with a mysterious man who doesn't want her to communicate with her best friend who has just died.

"There's a plane crash in the town of Grandview, and Melinda has to cross over 250 ghosts at once, not finding out until the final seconds of the season finale that one of them was going to have to be her best friend," she said. "It was a big deal for Melinda, and for our show, really, because up until then, this happened to everyone else around her, and it brought home that she's not safe from the pain that the people she helps feels on an everyday basis."

Season two picks up with Hewitt's character having to deal with her best friend, what she's going to do, how they are going to find her. Then there's the dark guy with the hat — "wide brim."

"You will find out who he is and where he came from," she said. "It's definitely a pull between good and evil. The good being Melinda and the evil being Romano and his army of evil-doers."

So has Hewitt's feelings about the spirit world evolved or changed since playing this role?

She's learned an important lesson, too.

"The biggest thing the show has taught me, and I think also our viewers, is just to live your life the best that you possibly can and not to have unfinished business," she said. "Say you are sorry when you are sorry, make sure you say I love you ... We don't want people to have to meet a Melinda Gordon, but we want them to know if they do — because everyone makes mistakes and doesn't always finish things — that there will be somebody out there, as far as we believe, that will take care of you and help you with the rest of your journey."

Hewitt says carrying the show has been a bit "overwhelming, but great." She credits her "amazing" crew and says her biggest job is keeping everyone's spirits up during the long days on the set.

"I feel really lucky. I get to do what I love," she told Smith. "I'm 27 years old. People believe in me to be there. People are watching the show, which is a huge deal on television now. We are on an amazing network that gives us the opportunity to grow and flourish, and I feel very grateful."

If long days on the set of her hit show aren't enough, Hewitt, who has starred on the big and small screens and has a music career, still finds time to work during her spare time.

"I actually filmed 'Garfield 2' while I was filming the show on the weekends, and I would never do that again, it was unbelievable. The show is my full-time job right now."