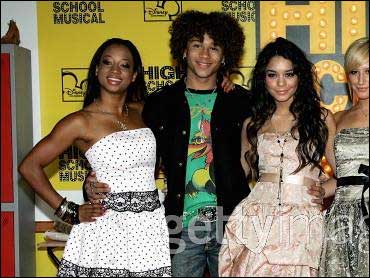 The premise is not new, but not since "Fame" or "Grease" has a musical had such impact. It is rollicking and squeaky-clean, geared for a young and lucrative audience.

The premise is simple: boy meets girl, and both love to sing. Will the boy, a high school basketball star, overcome the disapproval of his jock friends and try out for the school musical? Will the girl overcome her shyness and go for the guy? Add in some catchy tunes and toe-tapping numbers, and you have a winner.

So far, the movie has been seen by over 40 million people, and it has earned a Guinness World Record for the most successful songs from a song track. The movie is being relentlessly rolled out worldwide by its makers, Disney. The most recent release was in London on Sunday.

"What it does have going for it is songs and all that frenzied toe-tapping," film critic Richard Fitzwilliams said.

One of the movie's more endearing ideas is that anyone can be a star — something which resonated with many of its fans. So much so that "High School Musical" has become the most popular Disney Channel movie ever. Directed by the man behind "Dirty Dancing," it took America by storm, landing six Emmy nominations, and is anticipated to do the same in the U.K.

"High School Musical" has kept singer James Blunt off the top of the U.S. album charts, outsold "Saturday Night Fever," and become the biggest selling television soundtrack since the '80s hit "Miami Vice." The success of the movie has immeasurably changed the lives of its young stars.

"I was in Tower Records — was filled with teenagers — and all of a sudden I realized they were all staring at me," said one of the stars, Zac Efron. "I slowly backed up and ran to my car."

"I was at a restaurant, and this woman came up and said, 'My daughter would like a bite of your salad.' That's not even funny," star Ashley Tisdale said.

The movie will later be transformed into a Bollywood spectacular recorded in Hindi.