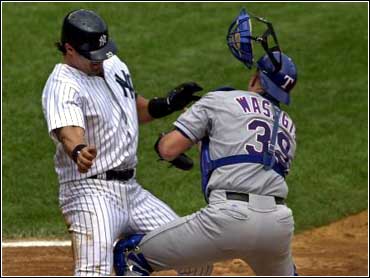 Just weeks after joining the New York Yankees, he's become their biggest attraction, no easy feat on a team that's won three of the last four World Series. Even teammates have altered their routines.

"Everybody's looking at his at-bats. They don't want to miss them." catcher Jorge Posada said after Hill homered for the 12th time in 68 at-bats since joining the Yankees, a two-run drive that helped New York beat the Texas Rangers 8-7 Thursday.

With 10 homers in August, Hill leads the American League. Not bad for a guy who got just 233 at-bats with the Chicago Cubs before the July 20 trade that sent him to the Yankees.

"He's incredible. It doesn't matter if it's a fastball, changeup or whatever," said Andy Pettitte, who won his seventh straight start. "He's making this ballpark look like Enron Field with the Astros, or Coors Field."

Hill, who went 3-for-5 with three RBIs and extended his hitting streak to 13 games, is hitting .429 since joining the Yankees and has driven in 23 runs in 21 games.

Hill crushed a changeup from Matt Perisho (2-7) in the fourth inning, and it ricocheted like a pool ball off the black front of the bleachers.

"If I keep talking about it, I'm sure I'll go 0-for-30," Hill said very quietly in the Yankees clubhouse as players ressed for a six-game road trip. "I come to the ballpark every day and the ball flies off my bat ... but most of the time, it's in batting practice."

Pettitte (16-6), second to Toronto's David Wells (18-5) in wins among AL pitchers, is also living a charmed life. He allowed a season-high seven runs five earned and 10 hits in six-plus innings, but New York has backed him with seven or more runs in 15 of 25 starts, including seven in a row.

"You don't get too many wins when you give up seven runs," said Pettitte, seeking his first 20-win season since 1996. "A couple of years ago, I think I was down to the bottom of the league in run support."

Posada played first base until the ninth inning, Jose Vizcaino was at second, David Justice in right, Clay Bellinger in center and Chris Turner behind the plate.

New York committed a pair of errors and a run-scoring passed ball, yet overcame a 4-1 deficit and maintained their domination of the Rangers, beating them for the 10th time in 12 meetings this year. New York is 42-13 against Texas since losing the opener of the 1996 AL playoffs.

Perisho got hammered for eight runs his season high and eight hits in three-plus innings, losing to Pettitte for the second time in an 11-day span.

Down by three, New York took a 6-4 lead in an ugly five-run third. Hill, Jose Canseco and Posada hit consecutive run-scoring singles to tie it, and Perisho made a bad decision, throwing too late to third on Chris Turner's sacrifice, leaving the bases loaded.

Scott Brosius, in a 3-for-31 slump, struck out and Bellinger hit a bouncer to third baseman Scott Sheldon, who threw home. Canseco, thinking there wasn't a play, didn't slide. Catcher B.J. Waszgis, needing just to catch the ball for a forceout, also appeared surprised by the throw. He straddled the plate as Canseco scored the go-ahead run. Vizcaino's RBI grounder then made it 6-4.

"He was as surprised as I was," Canseco said.

Rafael Palmeiro, 4-for-5 with three RBIs, hit run-scoring singles in the fourth and seventh, and Turner's passed ball on Jason Grimsley's pitch in the seventh allowed the Rangers to close within a run.

Rivera caught Chad Curtis' hard liner back to the mound to start the ninth. After Palmeiro singled, pinch-runner Scarborough Green was caught stealing by Posada, who moved behind the play in the ninth. Gabe Kapler then took a called third strike.

Texas, which finished a 2-6 road trip, went ahead in the first on Palmeiro's run-scoring single and Kapler's RBI grounder.

Bellinger hit a sacrifice fly in the second, but the Rangers went ahead 4-1 in the third on an RBI single by former-Yankee Ricky Ledee and a run-scoring throwing error by Vizcaino.