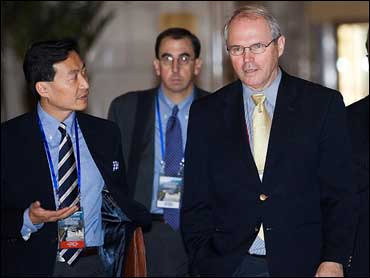 A top U.S. diplomat said Sunday he was optimistic about reaching an agreement on specific steps to shut down North Korea's nuclear programs.

However, U.S. Assistant Secretary of State Christopher Hill said he was uncertain whether negotiators would come up with a statement before the expected end of the latest round of six nation talks in Beijing on Sunday.

"I'm pretty confident," Hill said before leaving his hotel. "We know what the next steps will be and we have an understanding that will take us through the end of the year with respect to disablement and declaration."

The talks hosted by China, which also include Japan, Russia, and South Korea, are trying to push forward a February agreement under which the countries agreed to provide North Korea with 1 million tons of heavy fuel oil, or the monetary equivalent in other aid and assistance.

In return, North Korea agreed to shut down its main nuclear reactor, which it did in July, and declare and ultimately dismantle all its nuclear programs.

Pyongyang is expected to make that declaration before the end of the year, according to Hill. The U.S. wants a dismantling process that means a nuclear facility could not be made operational for at least 12 months.

Negotiators are seeking to close a gap between how far North Korea's reclusive hard-line communist government says it is willing to go to fulfill the pledge to close down its nuclear facilities and what Washington wants it to do.

Talks have dragged on for four years, during which time North Korea successfully detonated a nuclear device.

China circulated a draft document at Saturday's meeting at the Diaoyutai State Guesthouse, but it remained unclear whether specific steps would be detailed following the end of four days of talks on Sunday.

"I don't know if we'll have a joint statement," Hill said. "But I do know that we do have a way forward here."

South Korean envoy Chun Yung-woo said differences remained over the scope of a final document, but would not affect plans for disablement and disarmament.

North Korea reportedly wants the statement to include a written reference to its goal of being removed from a U.S. list of countries that sponsor terrorism.

"Whether we adopt a joint statement or not will not affect the steps that will actually take place," Chun said.

Wu Dawei said the statement was being kept private until the governments of North Korea, China, Japan, Russia, the United States and South Korea have had time to consider it.

Talks were to reconvene later in the week in Beijing.