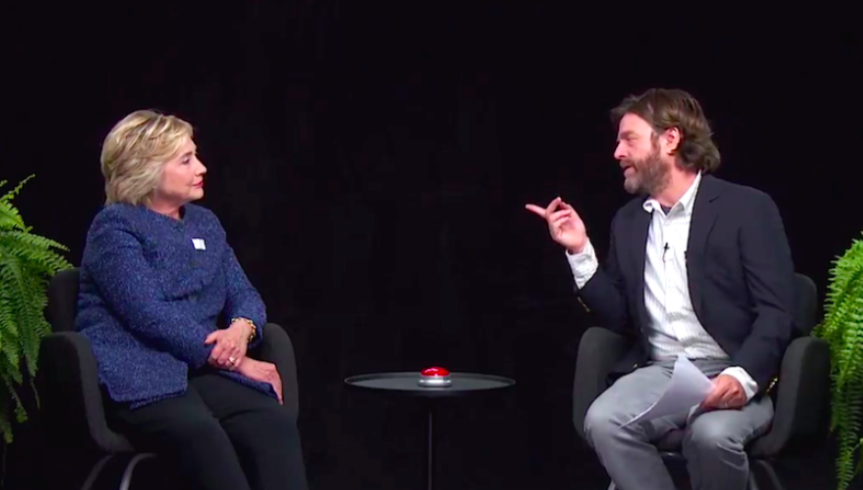 Hillary Clinton appeared in a “Between Two Ferns” online interview with Zach Galifianakis, roasting her opponent Donald Trump and taking some awkward questions posed by her “Funny Or Die” host.

In one jab at Trump, Clinton responded to a question posed by Galifianakis n preparation for the first general election debate this Monday. The comedian first asked Clinton what she would be wearing on the New York stage.

“I have no idea, so if you’ve got suggestions, I’m open to them,” she responded, but not before noting the “double standard” of women forced to ponder their wardrobe choices ahead of a presidential debate.

Galifianakis then asked what she thought Trump might wear to their face-off.

“I assume he’ll wear that red power tie,” she said.

“Or maybe like a white power tie?” Galifianakis quipped.

Clinton, who has criticized Trump for his racially-tinged comments on the campaign trail, responded: “That’s even more appropriate.”

The former secretary of state also vowed that if Trump ever did win the White House, she wouldn’t try to flee the country.

Clinton didn’t get off too easy in the interview, with Galifianakis making irreverent remarks about Clinton as “the first girl president” and alluding to her email controversy and previous friendly relationship with the Trump family. He also asked her how many words per minute she types and how the president likes his coffee.

“You were saying before we were rolling you wanted to take away everyone’s guns? Cool, Cool, cool,” Galafianakis said to Clinton at one point. “I really regret doing this,” Clinton deadpanned in response.

You can watch the full interview here:

Clinton, who taped the interview earlier this month on the day she was diagnosed with pneumonia, isn’t the first politician to sit down ‘between two ferns.’ President Obama did so in 2014 to push the Affordable Care Act.