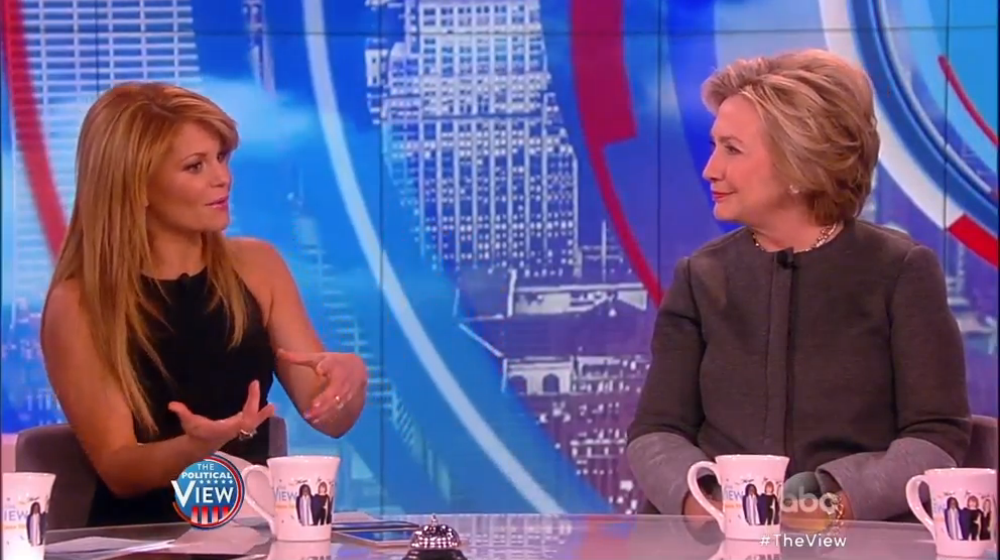 In an appearance on ABC's "The View" Tuesday, Hillary Clinton talked about Donald Trump, weighed in on feminists and abortion and revealed her favorite shows, musical artists and her "celebrity crush."

Last week did little to endear Trump to women -- his comments on abortion, his aggressive defense of his campaign manager, who's been charged with battery against a woman reporter, and his retweeting of an unflattering photo of Heidi Cruz prompted criticism from women and men alike. This was not lost on "The View," and hosts asked Clinton about what she thought would happen to women "if Trump wins, god forbid?"

Clinton noted that his insults aren't confined to women.

"I just don't understand what he thinks is the role of someone running for president. I don't think it is to scapegoat people, divide people, engage in this kind of, you know, prejudice and paranoia. And so it's not only women and we who should be concerned -- it's everybody -- because of the way he conducts himself."

Trump suggested last week that women who seek abortions should face some kind of punishment, a remark he later reversed.

Clinton was also asked whether women who oppose abortion can be considered feminists. While she feels that "being pro-choice is the best choice...because it is a choice and it's rooted in the thoughtfulness and the care that women bring to this decision," she said feminism isn't limited to those who support abortion rights.

"Of course you can be a feminist and be pro-life," Clinton told "The View."

On lighter matters, Clinton discussed her favorite shows, which included "Madam Secretary," "The Good Wife" and "NCIS" -- all on CBS -- as well as ABC's "Castle" and "Downton Abbey" on PBS. Musically, she's a fan of Katy Perry, Demi Lovato and Adele, and, asked whether she has any celebrity crushes, she mentioned George Clooney, who, she added, is hosting a fundraiser for her.