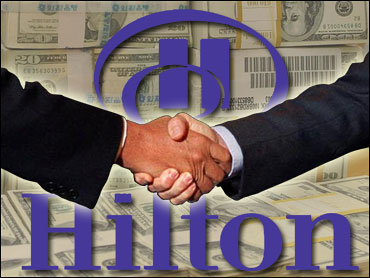 Under the terms of the deal, which had been in the works since October, Beverly Hills, California-based Hilton Hotel will only acquire the British company's lodging operations. Hilton Group will change its name to Ladbrokes PLC and focus on its online and in-store betting operation, which has hundreds of locations in Europe.

The deal is subject to regulatory and shareholder approval on both sides of the Atlantic. Both companies said it was likely to be completed by the first quarter of 2006.

"This transaction represents the final and logical step in a process that began in 1997 with the signing of our strategic alliance, and is a unique opportunity to once again position HHC as a global lodging industry leader for the first time in more than 40 years," said Stephen F. Bollenbach, Hilton Hotel's co-chairman and chief executive.

"With the current strength of our business in the U.S., our strong balance sheet, the beginning of a hotel industry recovery in the U.K., which accounts for about a third of HI's income, and the success we've had in working together with HI for eight years on such programs as Hilton HHonors, Hilton Reservations, Conrad development and technology initiatives, the time is right to put these two great organizations together," he said.

Hilton Group owns the rights to the Hilton brand outside the U.S. and operates more than 400 hotels under the Hilton, Conrad and Scandic name in 80 countries.

It also owns Ladbrokes, with some 2,000 betting shops in Belgium, Ireland and the United Kingdom.