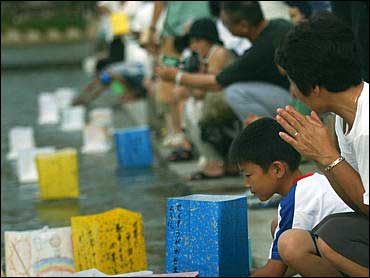 In May, Koizumi's Cabinet spokesman sparked controversy when he said that Japan is not legally prohibited from having nuclear arms - an assertion interpreted by some as a major shift in the country's long-standing anti-nuclear policy.

"As the only country in history to have experienced atomic bombings, I would like to underline Japan's unwavering commitment to its war-renouncing constitution and its three principles: non-possession, non-production and non-entry of nuclear weapons,"
Koizumi said.

The Peace Bell tolled at 8:15 a.m. -- the precise moment the Enola Gay B-29 warplane dropped the bomb on August 6, 1945 -- as the crowd stood and bowed their heads for a minute of silence in the still summer heat.

The United States dropped a second atomic bomb on the southern city of Nagasaki on August 9.

Hiroshima Mayor Tadatoshi Akiba urged countries to get rid of weapons of mass destruction, even as nuclear-armed India and Pakistan remain on war footing in the hotly contested region of Kashmir.

"The probability that nuclear weapons will be used again and the danger of nuclear war are increasing," Akiba said in the annual peace declaration. "Today, we vow to do our utmost to create a century of peace and humanity,"

Akiba criticized what he called the prevailing international philosophy of '"I'll show you' and 'I'm stronger than you are,"' and lashed out at Washington's go-it-alone stance.

"America has not been given the right to impose a 'Pax Americana' and to decide the fate of the world," Akiba said.

"Rather, we, the people of the world, have the right to insist that we have not given you the authority to destroy the world."

He then invited President Bush to visit Hiroshima and "confirm with his own eyes what nuclear weapons hold in store."

Among those paying respects Tuesday was Junichiro Nagai, 71, who was a middle school student on the outskirts of Hiroshima when the city was incinerated.

For months afterward, he suffered from radiation sickness, vomiting and diarrhea fits. He is still haunted by memories of a city burned to the ground in an instant and images of zombie-like victims with melted skin.

"My body's fine now," Nagai said after praying at the memorial. "It's what I saw that day that was most disturbing."

During Tuesday's ceremony, 1,500 white doves were released into the sky and 500 children sang a song of peace.

The memorial in Hiroshima includes the names of more than 200,000 people who were in the city on the day of the bombing. Every year, the names of those who have died since the previous year's anniversary are added to the cenotaph.

This year's total rose by 4,977 people to 226,870 victims, as more of the older generation succumbed to long-term illnesses caused by the blast, such as cancer, Hiroshima city spokeswoman Yukiko Ota said.

While Japan each year solemnly mourns its own war dead, less attention is paid to the victims of its military aggression and hardly any to the fact that its own military was engaged in research on an atomic bomb during World War Two.

In a small but timely reminder of that research, the Asahi Shimbun newspaper said at the weekend that secret documents on Japan's nuclear efforts, taken out of the country in 1949, had been returned to the institute in charge of the research.

Historians have long known about the research, although how much progress was made is a subject of debate.