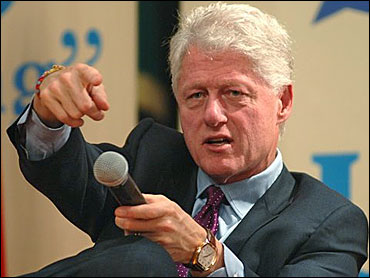 The impeachment of former President Clinton is in a gray area of history, too long ago to be a current event, too recent to be judged in perspective.

Yet history is already judging Mr. Clinton in the place where millions of students get their information about him: textbooks.

Seven years after he was impeached in a scandal of sex, perjury and bitter politics, Mr. Clinton has become a fixture in major high school texts.

The impeachment is portrayed in the context of his two-term tenure, a milestone event, but not one that overshadows how Mr. Clinton handled the economy, crime and health care.

The most commonly used texts give straightforward recaps of Mr. Clinton's toughest days, with some flavor of how it affected the nation. Absent are any of the lurid details of his relationship with Monica Lewinksy that spiced up daily news reports and late-night talk shows as the scandal and impeachment played out in 1998 and early 1999.

"It should not be in the book for titillating purposes or settling scores," said Alan Brinkley, the Columbia University provost who has written or contributed to several history textbooks. "It should be in the book because of its significance to our recent history."

Mr. Clinton was president from 1993 to 2001, the growing-up years of today's high school students. Even today's oldest high school students were only 10 or 11 during the height of the scandal, and today's middle schoolers were just approaching or entering first grade.

So, for students, the impeachment is literally a subject for the history books.

"This is very difficult for everybody, because it's so fresh," said Gilbert Sewall, director of the American Textbook Council, an independent research group that reviews history texts used in schools. "It's easier to nail down history like the transcontinental railroad. With Clinton, you're dealing with material that has by no means been settled."

The House impeached Mr. Clinton on charges of lying to a federal grand jury and obstructing justice to conceal his affair with Lewinsky, a White House intern. Although he was acquitted in a Senate trial, Mr. Clinton was branded as the second president impeached for conduct in office.

The topic is covered briefly in middle school texts. McGraw Hill's "The American Journey" offers a description that is representative of other accounts, balanced and methodical.

"Although there was general agreement that the president had lied, Congress was divided over whether his actions justified impeachment," the book says.

In McDougal Littell's "The Americans," a high school text, the topic merits two paragraphs. The same book gave more space to the impeachment of Andrew Johnson in 1868.

"The American Vision," a McGraw Hill high school book written by Brinkley and others, spends five paragraphs on Mr. Clinton's impeachment and one more on his uncertain legacy.

"Compression is a tremendous challenge," Brinkley said. "Five paragraphs on a topic is a lot for all but the most important issues."

Sometimes, the language gets blunt.

"A History of the United States," a Pearson Prentice Hall high school text, refers to the impeachment scandal as "a sorry mess" that diminished Mr. Clinton and his rivals.

Polls showed most Americans did not believe Mr. Clinton's "tortured explanations of his behavior," the book says, but also did not think his offenses warranted his removal.

By the time students get to college, the textbooks, as expected, offer more sophisticated detail of the impeachment and the way it all changed American public life.

Yet at all levels, the salacious details of the Lewinsky affair are nowhere to be found.

Students don't need the bawdy details to grasp the impeachment struggle, said Allan Lichtman, a presidential historian and professor at American University. But they do need textbooks that present the issue with as much depth as is practical, he said.

"The books not only influence the students, they influence the teachers," he said. "And given that many students don't go on to college, and even those who do may not revisit the material, the textbook may be their most significant impression."