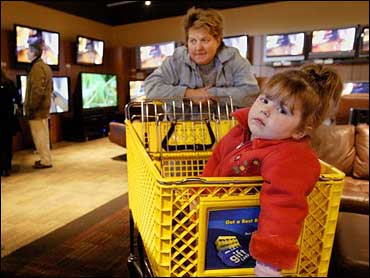 Retail sales posted a moderate increase in November as plunging gasoline prices left consumers with money to spend at the mall.

The Commerce Department reported that retail sales rose by 0.3 percent last month, slightly weaker than the 0.4 percent increase that analysts had been forecasting.

Economists generally saw the increase as a positive sign for retailers, who so far have posted mixed results in the all-important holiday shopping season.

The outlook is much brighter on the Internet. CBS News correspondent Anthony Mason reports that this holiday season, many shoppers are skipping crowded stores and buying online – $18 billion this holiday season according to one projection, which is up 25 percent over last year.

"Christmas sales are shaping up to be OK," said Mark Zandi, chief economist at Moody's Economy.com. He predicted this year's Christmas sales would be about 6 percent higher than 2004.

Nigel Gault, an economist at Global Insight, another forecasting firm, said retailers will have "not a blockbuster holiday season but far better than it appeared a couple of months ago when gasoline prices were over $3 per gallon."

Consumer confidence is being bolstered by the falling gasoline prices and stronger job growth after a two-month hurricane-induced lull.

Mason reports that many people do their online shopping at the office – Mondays are always the busiest day at Moosejaw Mountaineering, a Michigan store which sells outdoor clothing and gear. Robert Woolf, Moosejaw's owner, says the company is now doing 65 percent of its business over the Internet.

"A while ago, the Internet was really just a bonus to our business and now it really drives the entire business," Woolf says.

But even with good Christmas sales, economists cautioned that consumer spending, which has been a driving force in the current economic expansion, is set to slow significantly in the fourth quarter, primarily reflecting a slowdown in auto sales after attractive summer discounts led to robust sales.

For November, auto sales rose by 2.6 percent. However, that increase followed sizable declines in auto sales over the previous three months after a big jump in July triggered by automakers offering the general public the same sales incentives they gave their employees.

In a second report, the Commerce Department said American businesses increased their inventories by 0.3 percent in October, following a gain of 0.5 percent in September. That gain was slightly below the 0.5 percent rise in inventories economists had expected.

Analysts are looking for strong rebuilding of stockpiles to support overall economic growth in the October-December quarter. Even with the October inventory rise, the number of months it would take to deplete stocks at the current sales pace remained at a record low of 1.25 months.

The 0.3 percent increase in retail sales in November followed a 0.3 percent gain in October, which was revised upward from an initial estimate that sales had fallen by 0.1 percent in October.

The strength last month came from the 2.6 percent jump in auto sales, an advance that followed declines of 11.7 percent in August, 3.4 percent in September and 1.3 percent in October.

Excluding autos, retail sales would have been down 0.3 percent, the biggest drop in 19 months.

However, much of that weakness reflected falling gasoline prices, with sales at gasoline stations dropping by 5.9 percent, the biggest one-month decline in this category in 2½ years.

Excluding the gas sales decline, retail sales would have posted a 1 percent rise in November, the best showing since a 1.4 percent increase last July.

Sales at department stores were up 0.5 percent in November, a respectable showing after a big 1.6 percent surge in October. Sales at specialty clothing stores edged up a slight 0.2 percent last month after a huge 2.6 percent gain in October.

The nation's biggest retailers reported a mixed start to the all-important holiday sales season in the days after Thanksgiving. Consumers were willing to spend but only if they found bargains. Wal-Mart Stores Inc. and J.C. Penny Co. Inc. reported gains in November that reflected heavy discounting.

Sales at building supply centers jumped 1.9 percent November following increases of 1.8 percent in October and 1.9 percent in September. Analysts attributed the sizable gains to consumers in Gulf Coast states purchasing lumber and other supplies to repair homes damaged by a string of devastating hurricanes.