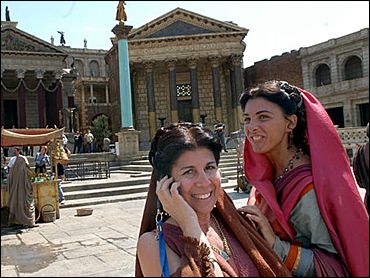 Ancient Roman commoners trembled with excitement at the arrival of Mark Antony, shoving to get near the general as he strode under a triumphal arch.

Then the moment passed. The plebeians sparked up cigarettes, slipped on shades and sipped bottled water.

An old-time epic feel has hit Rome (the modern one) with the return of swords and sandals in two big-budget TV series shooting here, one a joint HBO-BBC production and the other for ABC.

Shrieks for "the 40 Roman soldiers!" ricocheted around the set of HBO's "Rome" during a recent visit. "Turn off your cell phones!" production assistants bellowed. "Don't stand in the shot with that bottled water!"

Until recently, the Roman Empire had fallen, as far as Hollywood was concerned. Producers were skittish about sinking cash into classical epics when the public didn't seem terribly interested.

Then "Gladiator" (2000) made a fortune and the ancient epic sprouted anew: Brad Pitt stars as Achilles in "Troy" beginning this weekend; Oliver Stone's biopic on Alexander the Great, "Alexander," opens later this year; and now, these two series.

The more expensive is HBO's "Rome," whose first season of 12 episodes is budgeted at roughly $75 million. ABC's "Empire" has planned eight episodes for a reported $30 million.

Entertainment publications have bubbled with talk of competition between the two — Variety wrote of a struggle to find enough helmets, spears and chariots. This week, Variety and the Hollywood Reporter said "Empire" might cut the number of episodes or even cancel the project after a shakeup of top ABC executives, while saying competition with "Rome" wasn't helping.

Asked about this report, ABC said only that "Empire" remains in production.

In any case, the two series seem to have set off with similar tastes. At least one actor, James Purefoy, who plays Mark Antony in "Rome," says he was approached by both productions.

"There's no sense of competition," Purefoy insisted. "I think we're going for very different markets, to tell the truth."

And what, exactly, are those markets?

"I think I'd better not answer that," he replied. "I know what the difference is because I've read them both. Suffice to say this is just more my cup of tea."

Both series begin around the same time — HBO's "Rome" in 51 B.C., and ABC's "Empire" in 44 B.C. Both feature Mark Antony, Julius Caesar, and his nephew Octavian, who rose to become the first Roman emperor, Augustus.

Both tell history in part through the eyes of lowly Romans who get tied up with the future emperor — two soldiers in "Rome," and one gladiator in "Empire." Both productions chose relatively little-known British actors for the main roles.

HBO's "Rome" was first to start shooting, in March, at the legendary Cinecitta Studios, which has been the site of toga classics such as 1959's "Ben Hur," and of late was the set for "The Passion of the Christ" and "Gangs of New York."

Using five acres of backlot, production designer Joseph Bennett recreated parts of the Forum, as well as markets, villas and plebeian homes, in some cases with material from the leftover "Gangs of New York" set.

"Empire" began filming a month after "Rome," but promised to hit the small screen first. ABC said its first episode was slated to appear later this year, while HBO's air date is June 2005.

In a statement, the network described its "Empire" production as "one of the most lavish and technically complex ever to air on ABC in primetime."

"Empire," whose directors include TV veterans Kim Manners ("The X-Files") and Greg Yaitanes (CBS' "CSI: Miami"), is apparently gambling on attracting fans of "Gladiator," with its main character described as "Rome's finest warrior ... undefeated in the arena and considered a champion among men."

ABC said producers here were not available to discuss the series.

Meanwhile, "Rome," whose first episodes are by British director Michael Apted ("The World Is Not Enough"), is styling itself as an earthy drama, neither soap opera nor "Gladiator II."

Still, it was certainly "Gladiator" that made productions like these feasible.

"It became much more palatable once that film happened," said "Rome" star Kevin McKidd. "The amount of stuff that's going on at the moment is testament to that."