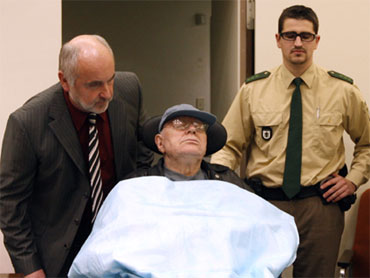 Jewish prisoners had to unload decomposed corpses at the Nazi death camp at Sobibor and were forbidden to warn new prisoners that they would be gassed within the hour, a survivor testified Thursday at the trial of John Demjanjuk.

The Ukrainian-born Demjanjuk, an 89-year-old retired Ohio autoworker, is accused of serving as a low-level guard at the Nazi camp in occupied Poland and is charged with accessory to murder in 27,900 deaths. Demjanjuk rejects the charges, saying he never served in Sobibor or any other Nazi camp.

Sobibor survivor Philip Bialowitz told the Munich state court that Jews being brought from western Europe largely believed the Nazi ruse that they were being resettled and arrived at the camp relieved that their long journey was over.

The 84-year-old testified that he and other Jewish prisoners helped unload the trains, under the watch of German SS and Ukrainian guards. Music was played over loudspeakers to keep the atmosphere calm.

"When I helped the Jewish passengers with their bags, some of them offered me a tip," said Bialowitz, who was born in Poland and now lives in New York. "My heart was bleeding because I knew that they would be dead in less than an hour and I couldn't warn them."

Bialowitz was the second Sobibor survivor to testify this week. Though neither he nor the other witness remember Demjanjuk from the camp, their testimony aims to give the court a general idea about how the camp operated.

Bialowitz, who was in Sobibor for six months before escaping amid a prisoner revolt in October 1943, told the court that one train arrived with most aboard dead or deranged with hunger.

He testified that German officers and Ukrainian guards shot some of those prisoners who were barely alive after they came off the train, while he and other Jewish prisoners had to unload partially decomposed corpses.

"I tried to pull a dead woman from the train but her skin came away in my hands," Bialowitz testified. He then saw another dead woman on the train, clutching a dead child, and testified that he collapsed to the ground, unable to take any more.

Immediately an SS man started whipping him and told him to get back up and work, then saw the dead woman and child himself.

"He said 'what beautiful scenery,' and snapped a photo before walking away," Bialowitz testified.

As in previous sessions, Demjanjuk showed no reaction to the testimony, lying on a bed with a baseball cap pulled down over his eyes. Demjanjuk - who suffers from several medical problems - has been declared fit to face trial, so long as court sessions are limited to two 90-minute sessions per day.

The trial's afternoon session was cut short after 10 minutes of testimony, when the court doctor said Demjanjuk was not well enough to continue. He did not elaborate.

"Demjanjuk to me is a symbol," Bialowitz said. "He didn't come to Sobibor for vacation - he came to help in the destruction of the Jewish people."

"(The trial) gives a message to the world that genocide will be punished," he added.

In an e-mail to The Associated Press, Demjanjuk's son called into question Bialowitz's testimony, given that he could not remember his father.

"Over the past 30 years of investigations regarding Sobibor, not one Jewish laborer who has testified ... could identify my father," John Demjanjuk Jr. wrote the AP. "If he were there, they would have known him."

Demjanjuk claims to be a victim of mistaken identity - a Red Army draftee from Ukraine captured in 1942.

He maintains he was himself held prisoner until joining the so-called Vlasov Army of anti-communist Soviet POWs and others, formed to fight with the Germans against the encroaching Soviets in the final months of the war.

His trial in Germany comes after 30 years of legal action against Demjanjuk on three continents.

Demjanjuk had his U.S. citizenship revoked in 1981 after the Justice Department alleged he hid his past as the notorious Treblinka guard "Ivan the Terrible." He was extradited to Israel, where he was found guilty and sentenced to death in 1988, only to have the conviction overturned five years later as a case of mistaken identity.