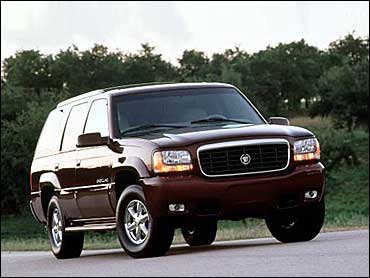 A delegation of religious leaders made a pilgrimage here on Wednesday to issue a moral challenge to the automotive industry: produce more fuel-efficient vehicles.

The group said transportation choices were moral choices, and leaders urged automakers to stop producing vehicles that "poison the planet."

The delegation planned to bring their message later in the day to top officials at Ford Motor Co., General Motors Corp. and the United Auto Workers.

The interfaith campaign represents an effort not only to encourage automakers to manufacture cleaner cars, but to urge congregants to buy them.

"It's not about know-how," said David Saperstein, director of the Religious Action Center of Reform Judaism. "It's about caring more."

The group also announced a "What Would Jesus Drive?" advertising campaign.

The ads are to begin running this month in North Carolina, Iowa, Indiana and Missouri. They urge consumers to park their sport utility vehicles and to buy fuel-efficient cars.

Minivans, SUVs and pickup trucks accounted for half the new vehicles sold in the United States last year. The average fuel economy for all 2003 model cars and passenger trucks dropped to 20.8 miles per gallon, reflecting what automakers and many buyers say is a higher priority on comfort and family needs than conserving gasoline.

According to the Environmental Protection Agency, automobile emissions can contain hydrocarbons, which form ozone that traps heat; carbon monoxide, which is poisonous to humans; nitrous oxide, which forms ozone and acid rain; and carbon dioxide, which contributes to global warming.

The United States leads the world in carbon dioxide emissions, both in absolute numbers and on a per capita basis.