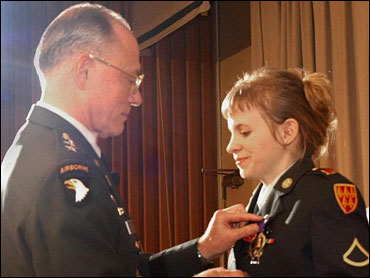 When Jessica Lynch was a girl, she liked to tell her grandmother that some day she would be famous.

Lynch's name has spread a bit beyond the borders of her home county — The 20-year-old Army Supply Clerk's wounding, imprisonment and dramatic rescue in Iraq have seen to that.

On Tuesday, after almost four months of recuperation from multiple broken bones and other injuries, hospital stays in Iraq, Germany and Washington, D.C., Lynch is being welcomed back to the rolling green hills of West Virginia's smallest county.

"We are excited just to see her, just to be able to give her a hug," her grandmother said. "To Jessi, home is in the hills. She has been wanting to get here."

CBSNews.com will Webcast live coverage of the homecoming beginning at 2 p.m. EDT.

CBS News Correspondent Barry Bagnato reports, they can't wait to see Lynch at the tacky little What Not Shop, on the big bend in her little hometown. So many yellow bows went up here when she was rescued, ribbon became scarce until some folks from Cincinnati saved the day.

"They was kind enough to send down a few rolls so we could decorate the town again when she came home," Emcy Ashby

Hundreds of media personnel are in this 1,000-person county seat to report her first public words since her ordeal. Hundreds, and perhaps thousands, of people are expected to line the route of the military motorcade that was taking her home.

Lynch and her parents were boarding a Black Hawk helicopter at Walter Reed Army Medical Center in Washington in late morning for the flight to Elizabeth. Also on the flight was Lynch's cousin, Dan Little, a first sergeant in the Parkersburg National Guard unit that is supplying the four-person crew.

Able to walk with the aid of a walker but still having trouble standing, Lynch was to make brief public remarks from a wheelchair at a tent erected for an afternoon media event in a town park.

Using 1,600 yards of the donated lawn chair material, town workers have hung hundreds of yellow bows along the motorcade route from Elizabeth to her home in Palestine, a community of about 300 some five miles away.

Sue McCloy, of Parkersburg, planned to close the Hope Shop Thrift Store and Food Shop in Elizabeth to see the motorcade pass. She echoed many locals in expressing pride and joy in Lynch's return but concern about media attention that many feel is overblown.

"I have mixed emotions," McCloy said. "Jessica deserves everything she can get, but I feel sorry for her and her family."

"I just hope she can cope with everything that's going on around here," said Regina Ray, owner of Creative Gifts and Floral in Elizabeth. "You think you are coming home to normal, and this town is not normal."

Greg and Sheila Hodak, of Goldsberg, N.C., stopped Monday on their way to Pennsylvania to drive by Lynch's house.

"We just felt drawn to come by," Sheila Hodak said. "I would love to get a glimpse of her. Everybody felt like she was their adopted child."

On Monday, Lynch was awarded the Bronze Star, Purple Heart and Prisoner of War medals at Walter Reed Army Medical Center in Washington. The Bronze Star is given for meritorious combat service, a Purple Heart is most often awarded to those wounded in combat, and the POW for being held captive during wartime.

"The Purple Heart ... was not necessarily about being wounded or injured in action initially, but that's what it has come to symbolize," said Lt. Gen. James B. Peake, the Army Surgeon General, in presenting the medals. "It's a special award and not one you choose to get."

Little, who has spoken twice with his cousin in the past week, said Lynch's spirits have been buoyed by her imminent homecoming.

"She's a strong, disciplined young lady," Little said. "Her injuries are long healing, and that can be hard if you dwell on it. But she's not allowed that to happen."

As Bagnato reports, it may take many years for the 20-year-old to recuperate from the multiple broken bones and other injuries she received. The folks in her hometown hope they can help heal her mental wounds, as well.

Lynch's convoy was ambushed near the Iraqi city of Nasiriyah after it made a wrong turn. Eleven soldiers from the convoy were killed and Lynch, a supply clerk, was severely injured.

U.S. forces recovered Lynch at a Nasiriyah hospital April 1. Five other 507th Maintenance Company soldiers who were captured and held apart from Lynch were freed April 13.