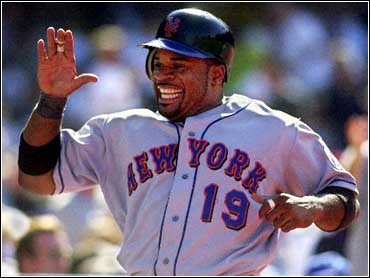 "You have to keep playing and battling for nine innings because you never know what's going to happen," said Mike Bordick, who scored the winning run on a botched rundown play to help the Mets capture their eighth consecutive series.

"These guys got fired up, and we got some big hits. Getting big hits like the home runs by Bubba and Lenny, those are the kind of things that keep you going through a nine-inning game," Bordick said.

Bordick and Darryl Hamilton singled to open the eighth. Bordick was trapped off third on Harris' comebacker to Terry Adams (5-6), but he and pinch-runner Adrian Beltre sailed over catcher Todd Hundley's head.

Harris scored when Derek Bell's routine grounder went through the legs of second baseman Mark Grudzielanek for the Dodgers' third error of the game and sixth in the three-game series.

The fading Dodgers, who dropped two of three this weekend, lost for the 10th time in 14 games.

"We beat ourselves. We can't do that," Los Angeles manager Davey Johnson said. "I don't have a lot to say about this one."

Turk Wendell (6-4) pitched two innings for the victory, allowing a run and three hits. Armando Benitez pitched the ninth for his 33rd save in 37 chances.

Eric Karros gave the Dodgers a 5-4 lead with an RBI single that chased starter Bobby J. Jones in the fifth. But Trammell, pinch-hitting, and Harris opened the sixth with consecutive home runs on fastballs by Darren Dreifort.

Trammell hadn't homered since July 30 in his first at-bat with the Mets.

"The back-to-back homers were pretty nice," Harris said. "Bubba had been struggling his last couple of at-bats, so I told him he had to relax and it'll come for him. He's just trying to do too much in a Met uniform."

The Dodgers, who overcame a 4-0 deficit, tied it 6-6 in the seventh when Gary Sheffield scored from first on Shawn Green's bloop single to left-center that was misplayed twice by left fielder Harris.

"With two strikes on Green, we were supposed to bring (center fielder Jay) Payton back over a little bit. But he couldn't hear me," Harris said. "Neither of us could get the ball. When I looked up, I saw Sheffield going into third and I took my eye off the ball. All hell broke loose after that."

"You expect to win every time out, but I just didn't get the job done today," the right-hander said. "I made a lot of mistakes all day long, and they cst us. I don't think the loss has anything to do with the mistakes we made late in the game. It was just bad pitching early."

The Dodgers closed to 4-3 in the third when Sheffield scored on Green's RBI double. Los Angeles got even on Hundley's 21st homer and second of the game. It was the 12th time Hundley has homered twice in a game and second this season.

Alfonzo opened the scoring with his 16th homer after a ground-rule double by Bell. Alfonzo had 13 hits, 10 RBIs, three homers and a .361 average against the Dodgers this season.

The Mets made it 4-0 in the second. Payton led off with a double and one out later, Jones swung at a third strike, which Hundley couldn't handle cleanly, and reached base on the passed ball.

Hundley was booed loudly when he came to bat in the bottom of the inning after a one-out single by Karros. But he silenced the crowd of 46,122 by driving a 1-1 pitch into the right field bullpen to close the deficit to 4-2.