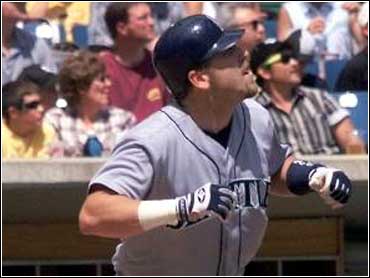 Rookie Rocky Biddle had no problem with the heart of Seattle's lineup. He quickly learned that in the big leagues, he has to get the bottom of the order out, too.

Joe Oliver and Mike Cameron hit two-run homers to back Aaron Sele, who reached 13 wins for the fourth straight season, and the Mariners beat the Chicago White Sox 6-3 Thursday.

"If it was just three guys on this team (doing everything), we wouldn't have 68 wins," Cameron said. "Other guys are coming through."

Cameron was 3-for-4 to help spoil the first major league appearance of Biddle (0-1), called up from Double-A Birmingham. The fifth rookie pitcher to start for the White Sox this season and third in four games, Biddle sported long sideburns for his debut.

The Mariners' 7-8-9 hitters were a combined 7-for-7 against Biddle with two homers, six RBIs and seven runs scored.

"Maybe I was more focused on the top of the lineup," said Biddle, who allowed six runs and eight hits in 5 1-3 innings. "I didn't keep my focus, and there's no room for that up here, and I found that out today."

"The bottom of the lineup really produced," Seattle manager Lou Piniella said. "It's good to see a total team contribution."

Sele (13-6) gave up three runs and eight hits in 7 2-3 innings, struck out five and walked nine. He left his previous start in the sixth when he was hit by a liner.

Frank Thomas homered for the third straight game, leaving him tied with Toronto's Tony Batista for the AL lead at 34. Thomas, who also had an RBI single in the eighth, has 101 RBIs.

Chicago, 13-14 since the All-Star break, has seen its AL Central lead drop to 7 1/2 games, its smallest since June 27. The White Sox keep sending out young pitchers.

"That's what we've got. We have no choice," White Sox third baseman Herbert Perry said. "With Jim (Parque), Mike (Sirotka) and J.B. (James Baldwin), we'll be OK. The kid (Biddle) had good stuff. I'm not worried. We've just got to start to play our game and if we don't, we don't deserve to be in the playoffs."

"I wouldn't be afraid to go with him for a length of time," White Sox manager Jerry Manuel said of Biddle. "This guy today was really impressive. He had a warrior mentality. I'll take my chances with it."

Chicago had a chance to rally in the eighth. With two outs and two on, Manuel stuck with left-handed Harold Baines against left-hander Arthur Rhodes, struck out Baines on a 3-2 pitch.

"I know Harold like the back of a book," Rhodes said. "I've seen him play, I've seen him hit. My theory was to throw all fastballs and keep them down and away."

Cameron singled with two outs in the second and Oliver followed with his seventh homer.

With two outs in the fourth, Cameron and Oliver both singled and Carlos Guillen tripled them home for a 4-0 lead.

Mark Johnson singled with one out in the eighth, reached third on Durham's double and scored on Jose Valentin's groundout. Thomas then singled to make it 6-3 and chase Sele.