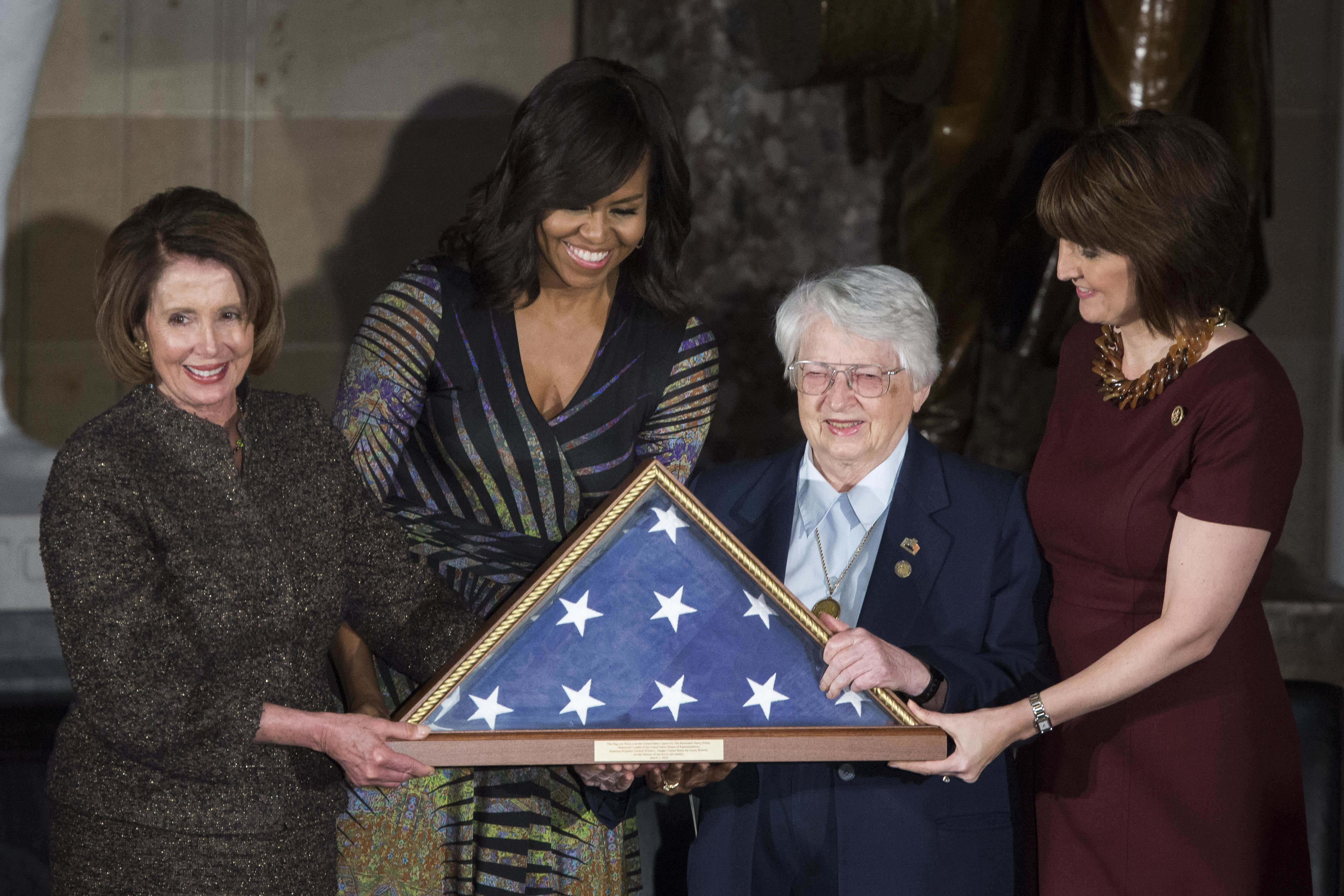 Sixty years ago, Wilma Vaught was 26 years old and working for an atomic energy company when an army recruiter reached out to her, saying the military would give her a commission and allow her to manage and supervise.

She decided to enlist in the Air Force, even though the ambitious airwoman knew she'd run into a glass ceiling -- U.S. law at the time flatly prohibited her from reaching its highest ranks.

"So that was out," Vaught said Tuesday, at an event Wednesday honoring women in the military, hosted by House Minority Leader Nancy Pelosi.

Ten years later, though, Congress voted to open up the top military ranks to women. Vaught, a retired brigadier general, quipped that instead of receiving an on-the-spot promotion, she was sent off to Vietnam. There, she served as a management analyst in Saigon's Military Assistance Command.

Afterwards, she became the first female Air Force officer to attend the Industrial College of the Armed Forces and then on a tour in Guam. She went on to be the first woman to deploy with an Air Force bomber wing.

Pelosi, First Lady Michelle Obama and Jill Biden gathered in Washington to honor the accomplishments of Vaught and other women veterans. Vaught is "one of the most inspiring, trailblazing women I have ever met," Obama said. "Every time I see her I tell her I want to grow up to be just like her."

The event was also meant to raise awareness about women veterans, sometimes referred to as the military's "invisible veterans." Just 10 percent of women veterans take advantage of G.I. benefits, Pelosi pointed out, even though "the post-9/11 generation represents largest percentage of women ever to serve in military."

Women have been allowed to serve as full-fledged members of the military since Congress signed the measure into law in 1948, when Vaught was just graduating from high school and hadn't yet begun her military career. The legislation, she laughed, "wouldn't have meant a thing to me."

Vaught was promoted to brigadier general in 1980, the first female member to make rank in the comptroller career field. General Vaught remembers it well. "That was the year that the VA discovered, 'my goodness, we have a lot of women veterans.'"

Vaught noted that facilities have been changing to grant women equal access to VA benefits.

Since the Advisory Committee on Women Veterans was established in 1983, female veterans have received more complete physical health examinations, including gynecological services. She's been retired for 30 years now, since 1985.

"I remember it well," she said. "There were seven generals and admirals, and I was the ranking one, a brigadier-general."

Today, there are three four-star women generals--two in the army and one in the navy.

"We have come a long way," General Vaught said.