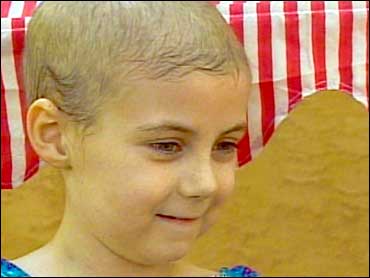 In a picture-perfect house on the most idyllic street, the prettiest little girl fights the ugliest of battles.

Alex Scott has had cancer for most of her seven years, reports The Early Show correspondent Tracy Smith for this America's Hero segment.

It began a week short of her first birthday, when her parents sensed something wrong with their normally happy, healthy girl. A trip to the emergency room confirmed the worst.

"They handed us a box of tissues and put us in a room," says her mother, Liz Scott. "And told us that there was in fact a tumor growing on her spine and they suspected it was not benign."

Scott remembers that as the lowest moment of her life. Even after surgery, Alex's prognosis was grim. "We were told she would never walk…that she was paralyzed from the chest down," says her father, Jay Scott.

But Alex kept trying to get up, and - with the help of tiny braces- -take a few steps. Eventually, Alex willed herself to walk unassisted.

"The day the doctor said she might not need braces anymore," her father recalls, "she took them off and refused to ever put them on again."

Her attitude then was a hint of what was to come.

On a good day, Alex is like any other kid. But for pediatric cancer patients, there are never enough good days.

"That just breaks my heart," say her mother. "She doesn't watch TV, she doesn't even want anybody to talk to her. She just wants to be left alone."

It was on one of these bad days that Alex told her parents she wanted to open a lemonade stand and give the money to cancer research.

"I thought she might be setting herself up for disappointment," says Liz Scott, "so I said you might only raise $5 or $10 with the lemonade stand and she said, "I don't care, I'll do it anyways."

Four years ago, Alex opened her first stand - and made $2,000. Asked why the lemonade stand is so important to her, Alex replies simply, "Because it's helping people."

Word of the sick child trying to help other sick children spread. In the past three years, Alex's stand has been mobbed. Corporate sponsors have gotten into the act: Volvo named Alex a hero for life and gave more than $10,000. Kids at Clara Barton Elementary School in Philadelphia donated cash - and their hair - in a show of support. Alex's money jar was filling up fast.

While her own battle is far from over, Alex Scott's willingness to fight for others has meant more than any amount of money could buy.

In a way, the sign over Alex Scott's lemonade stand might be misleading: She is really selling hope - at fifty cents a glass.