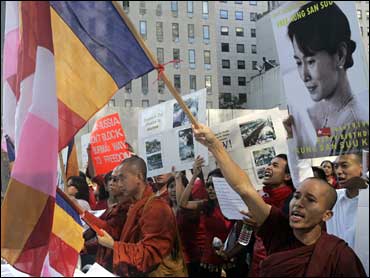 Watching soldiers firing their guns and beating die-hard protesters with clubs in the streets of Myanmar, a distraught man decried the bloodbath and pleaded for international intervention.

With the streets eerily quiet in Myanmar, which is also known as Burma, Saturday after the military's brutal crackdown on three days of demonstrations, many protesters were losing hope and falling back on such familiar pleas for help from the outside world.

"The world cannot fail the people of Burma again," said the National Coalition Government of the Union of Burma, an exile group based in Thailand. "Selfless sacrifices deserve more than words and lip-service. They want effective intervention before it is too late."

It's a call made every time the pro-democracy movement has dared stand up against Myanmar's 45 years of harsh military rule, only to be crushed.

Some of those challenging the regime in the most forceful demonstrations in nearly two decades still hope such help - even in the form of U.S. bombing - may arrive. About 300 die-hard protesters marched down a street in the Chinatown section of Myanmar's main city, Yangon, on Saturday, waving the peacock-emblazoned flags of the democracy movement. They dispersed when soldiers arrived.

Monks and civilians called diplomats to report that troops had shown up at three different monasteries late Saturday, but were prevented from entering by people in the neighborhood who massed outside them. The soldiers departed, but with threats of returning in larger numbers.

U.N. envoy Ibrahim Gambari also rushed to Myanmar on Saturday and was taken immediately to Naypyitaw, the remote, bunker-like capital where the country's military leaders are based.

A pro-democracy uprising in 1988 was brutally crushed by Burma's military regime, reports CBS News correspondent Bill Whitaker. Since the junta ignored the condemnation of the outside world then, why would they listen to Gambari now?

"The fact that there is a titular envoy of the U.N., and is inside Burma, got a visa, (makes me) more hopeful," said Maureen Aung Thwin of the Open Society Institute. "And also, things are deteriorating so fast, maybe they will grasp, you know, at whatever he has to offer."

The White House urged the junta to allow Gambari to have access to Aung San Suu Kyi, the Nobel Peace Prize laureate who is under house arrest, and ordinary Myanmar residents.

Many people in Myanmar said despite Gambari's visit, however, they're resigned to a repeat of the 1988 uprising when the international community stood by as thousands were gunned down.

"Gambari is coming, but I don't think it will make much of a difference," said one hotel worker, who like other residents asked not to be named, fearing retaliation. "We have to find a solution ourselves."

The demonstrations began last month by people angry over massive fuel price hikes, then mushroomed to crowds of tens of thousands after the monks joined in.

The junta, which has a long history of snuffing out dissent, started cracking down Wednesday, when the first of at least 10 deaths was reported, and then let loose on Thursday, shooting into a crowd of protesters and clubbing them with batons.

The crackdown has triggered an unprecedented verbal flaying of Myanmar's generals from almost every corner of the world - even some criticism from No. 1 ally China.

But little else that might stay the junta's heavy hand is seen in the foreseeable future.