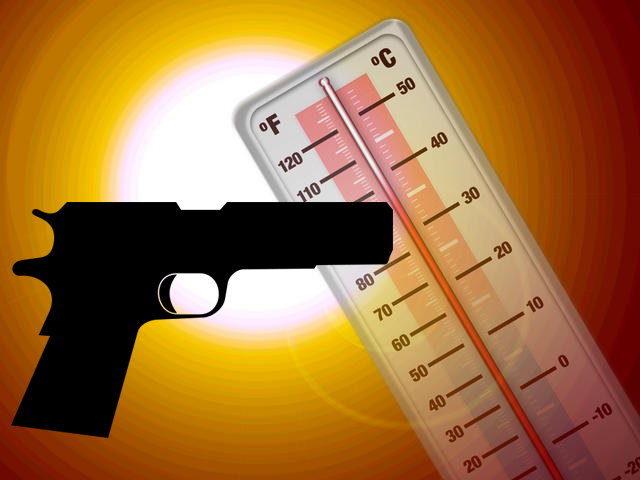 (CBS) Is summer the most dangerous season? It certainly seems like it in Chicagowhere a triple-digit heat wave has coincided with more than 20 people shot and three killed in just the last three days.

A 2001 paper called "Heat and Violence" by University of Iowa professor Craig Anderson stated that there are 2.6 percent more murders and assaults in the U.S. in the summer than in the winter and that "hot summers produce a bigger increase in violence than cooler summers."

And according to a 2010 study of violence in Cleveland from 1999 to 2004 published in the journal "Weather, Climate and Society," hotter temperatures correlated to higher amounts of aggressive crime, especially domestic violence and non-aggravated assaults - attacks involving no weapon and no serious injury.

"If you plot crime and temperature together you get a straight line up," said Dr. Scott Sheridan, the Kent State University professor who co-wrote the Cleveland study. "Some of the reason is increase in aggressive behavior, but a lot of it has to do with more people interacting with each other when the weather is warmer."

Eugene O'Donnell, a former New York City police officer and current lecturer at John Jay College of Criminal Justice, says that when he was on the beat, the saying was "Jack Frost is the best policeman."

Curtis Davenport of the Atlanta Police Department agrees. Davenport told Crimesider in an email that last winter when the city was iced over, they saw their lowest crime rates of the year.

According to Professor Craig Anderson, who authored the 2001 paper on heat and violence, "the scientific evidence shows that uncomfortably hot temperatures increase irritability, which in turn increases aggressive behavior, including violent crime."