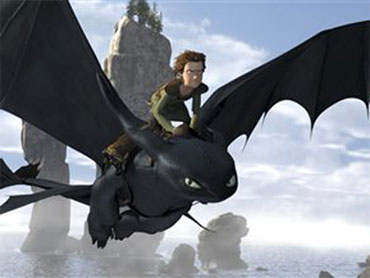 Spring has sprung and movie theaters will be blooming with some highly-anticipated films in the next weeks.

On "The Early Show," Dalton Ross, assistant managing editor of Entertainment Weekly magazine, featured some of the films that are about to heat up screens across the country.

"How to Train Your Dragon" (March 26)
America Ferrera, Gerard Butler, Jay Baruchel - From the studio that brought you "Shrek," "Madagascar" and "Kung Fu Panda." Sure to be huge with families.

A young, timid Viking finds himself stuck with a pet dragon, even though fire-breathers are the sworn enemies of his people.

Ross said, "I make it a habit to steer clear of anything that breathes fire, but I may learn this may not be the case with this film."

Perseus (Sam Worthington) tangles with some fearsome 3-D behemoths after learning his Greek-god father, Zeus (Liam Neeson), is under siege by the evil Hades (Ralph Fiennes).

"With the new home systems, (film companies) are saying, 'How can we get people to the theaters?' We need some bells, we need some whistles. And 3-D has worked," Ross said. "3-D is coming home soon, as well, so TVs are coming. But it's the new trick to get people in theaters."

"Date Night" (April 9)
James Franco, Steve Carell, Tina Fey, Mark Wahlberg -- Fey and Carell - together at last! Unfortunately, not as funny as either "30 Rock" or "The Office," but still, the date movie of the spring.

Why did it take this long for Hollywood to pair Tina Fey and Steve Carell? This comedy from Shawn Levy ("Night at the Museum") corrects the oversight, casting the two comedians as a married couple mistaken for wanted lowlifes while out on the town.

Ross added, "Mark Wahlberg has his shirt off for the entire film, so if you like that, there you go."

"A Nightmare On Elm Street" (April 30)
A contemporary reimagining of the horror classic. Sure to give nightmares to a whole new generation of moviegoers.

In this remake of Wes Craven's horror classic (in which, as trivia buffs will remember, Johnny Depp played one of the victims), teenagers are stalked by Freddy Krueger, a maniacal murderer who kills people in their dreams. You fall asleep, you die. In the land of producer Michael Bay, that's almost too much plot.

Ross said the trailers "look amazing" for the sequel.

He continued, "You have Mickey Rourke as Whiplash. He looks completely badass. You have Scarlett Johansson as Black Widow. She looks great. Lot of action, a lot of fun."