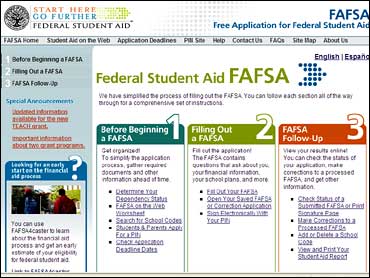 The House is poised to vote to push private lenders out of the federal college loan business and massively expand the government's own lending program.

Following a day of debate, House lawmakers were expected to approve on Thursday a student aid bill that has widespread support, including from the White House. The measure will then go to the Senate, where its fate is somewhat less certain.

Putting the government in charge of all federal loans would save taxpayers an estimated $87 billion, according to the Congressional Budget Office. The CBO says the figure could be much lower, $47 billion, when administrative costs and market conditions are considered.

The money would boost Pell Grants for needy students, increasing the maximum grant by $1,400 to $6,900 over the next decade. It also would pay for a new college completion fund, community college reforms and more college aid for veterans.

"No student in this great country of ours should have to mortgage their future to pursue their dreams," said the bill's sponsor, California Democratic Rep. George Miller, chairman of the House Education and Labor Committee.

Yet the money also would be spent on things that don't help pay for college, such as construction at K-12 schools and new preschool programs.

And while the measure would increase Pell Grants, it would do nothing to curb college costs, which rise much faster than Pell Grants do.

As consumers, college students probably wouldn't notice much difference in their loans, which they would get through their schools. Broadly speaking, the bill doesn't do much to make loans cheaper or help pay them off.

It does keep interest rates for need-based federal loans from jumping from 3.4 percent currently to 6.8 percent as scheduled in 2012. Rates for most other loans would remain at 6.8 percent.

Still, the bill's changes to federal college aid programs would be the most sweeping since their creation in the 1960s and would fulfill a campaign promise by President Barack Obama.

The measure would end the subsidized loan program under which private lenders made $56 billion in government-backed loans to more than 6 million students last year, compared with $14 billion in direct loans from the government.

The bill would also shorten the labyrinthine college aid form, which Obama proposed to eliminate altogether when he ran for president.

Republican critics argue it is wrong to put the government in near-total control of student lending.

"Ask yourselves whether another government takeover is what we need right now," said Minnesota Rep. John Kline, senior Republican on the Education Committee.

Many also worry about job losses in their districts. Private lenders employ more than 30,000 people whose jobs depend on the subsidized loan program, and the industry says many would be laid off.

Employees of Sallie Mae, the biggest student lender, have been trying to involve local leaders in the issue and recently held a series of town hall meetings and petition drives in Pennsylvania, Florida, Delaware, New York and Indiana.

The Reston, Va.-based lender has about 8,500 employees in the program and probably would lay off about 30 percent of those workers. It still will have contracts to service federal loans.

Democratic Rep. David Wu of Oregon said lenders still could make all the loans they want. "What will not happen anymore is making those student loans with taxpayer subsidies," he said.

Under the measure, Pell Grants would rise slightly more than inflation over the next decade, increasing on average by about 2.6 percent yearly, according to the bill's sponsors.

However, the grants would still depend on annual spending bills and could rise less than promised, as has happened in the past.

Obama originally proposed to take Pell Grants out of lawmakers' hands entirely, making the program an entitlement like Social Security and Medicare, which would have cost an estimated $117 billion - more than lawmakers have to spend.