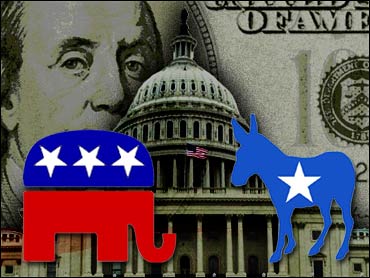 Lawmakers voted Wednesday to cut federal aid to education for the first time in a decade as the House narrowly passed a spending bill that would freeze or cut back a wide variety of domestic programs.

The $602 billion measure covers education, health research, and medical and job training programs, among others. After years of budget increases, the measure essentially imposes a 1 percent cut to programs funded at lawmakers' discretion, providing $142.5 billion for them. The rest of the funding in the bill represents mandatory payments, chiefly for the Medicare and Medicaid programs.

The cuts in the bill, a compromise between very different House and Senate versions, would be magnified by an additional 1 percent across-the-board cut to all agency budgets that GOP leaders promise to pass before Congress adjourns. Taken together, about $3 billion worth of cuts would be spread across budgets for the departments of Education, Labor, and Health and Human Services.

Medical research funded by the National Institutes of Health — whose budget was doubled over recent years — would be frozen at last year's levels, which promises to limit the amount of new research projects.

Programs funded under President Bush's No Child Left Behind education law would face a 4 percent cut, while aid for special education and Title I funding for disadvantaged children would be frozen at last year's levels, assuming the across-the-board cut is imposed.

The 215-213 vote caps a successful drive by Mr. Bush and his GOP allies on Capitol Hill to trim the budgets of most domestic agencies below prior-year levels. And, after years of bundling appropriations bills into omnibus measures, Republicans managed to get the process back on track and pass the 11 annual spending bills as stand-alone measures.

Wednesday's vote came just weeks after a virtually identical bill went down to defeat after protests from GOP moderates and lawmakers upset over cuts to rural health initiatives. Senior lawmakers made minor modifications to the measure, adding back $90 million for rural health programs.

Democrats harshly attacked the bill as an assault on children and the poor and noted that Wednesday's debate came one week after the House passed $95 billion worth of tax breaks, extending lower taxes on capital gains and dividends. Democrats argued that those tax cuts benefit wealthy investors.

"The holidays are supposed to be a time of generosity — a time when Santa Claus fills children's stockings," said Rep. David Obey, D-Wis. "Instead, this Congress is emptying them in order to provide a tax cut the gives 50 percent of the benefit to people making more than $1 million."

Republicans said they had produced the best bill they could in lean budget times and noted that funding in the bill had more than doubled since Republicans gained control of Congress 11 years ago. They noted that lawmakers had sacrificed $1 billion worth of hometown projects such as grants to community health centers to spread additional funds to other programs.

The bill heads to the Senate where it faces uncertain prospects later in the week.

"I'm not certain they have the votes in the Senate for it," said Sen. Tom Harkin, D-Iowa, lead negotiator for Senate Democrats on the measure.

Senate Republican leaders, however, are cautiously optimistic the measure will pass.

Completion of the labor, health and education bill leaves a pentagon bill as the last spending measure for Congress to complete before adjourning for the year. That measure is shaping up as a catchall bill that will carry new funds for hurricane relief and to prevent the spread of avian flu.

Negotiations on the Katrina relief bill intensified Wednesday, and a clash looms between House conservatives and the Senate over providing additional hurricane relief above Mr. Bush's $17.1 billion request.