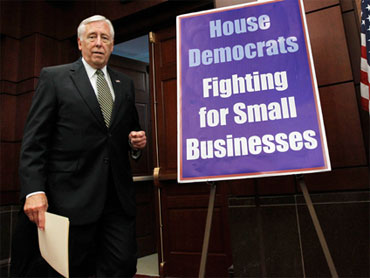 A Democratic leadership aide confirmed to CBS News this afternoon that House majority leader Steny Hoyer told Democrats today that a vote will be held during the lame-duck session to extend the Bush-era tax cuts for everyone except families making more than $250,000.

President Obama and many Democrats want to extend the cuts for most Americans, but not those earning more than $250,000 per year. Republicans and some Democrats want the cuts, which expire at the end of the year, extended for all Americans.

The decision by the Democratic leadership to hold a vote on extending the cuts for all but the top two percent of earners does not guarantee that the measure will actually pass. Democrats could bring the bill to the floor in a way that speeds up the process but requires a two-thirds majority for passage, meaning they would have to peel off some Republicans to get it through. (That's what happened with today's failed vote on extending unemployment benefits.) In addition, some House Democrats are siding with Republicans on the matter, which means even a straight majority vote would be no sure thing.

And even if the measure does get through the House, it would need to pass the Senate - which seems like a tall order. Democrats would need to attract Republican support for passing the bill to overcome a Republican filibuster, and there have been few signs that Republicans are willing to break ranks.

In a meeting today, President Obama and Democratic leaders discussed the agenda for the lame-duck session, according to White House press secretary Robert Gibbs. First and foremost on the agenda for Mr. Obama, according to Gibbs, is extending the tax cuts for middle class Americans.

(Other top items: Eliminating the Alternative Minimum Tax for middle class taxpayers; getting the Senate to confirm Jack Lew as Budget director; ratifying the START treaty; repealing "Don't Ask, Don't Tell"; and enacting the Dream Act for undocumented immigrants in the United States.)

As CBS News political analyst John Dickerson writes, the tax cut battle has become a game of chicken. Niether party wants to be held responsible if the tax cuts expire for all Americans because of inaction, resulting in a huge tax increase in the New Year. But they also don't want to blink on what has become a central issue for the base on both the left and right.

UPDATE: Hoyer confirms in a statement:

"The House will vote on an extension of middle class tax cuts before they expire. Democrats are firmly committed to continuing tax cuts for middle class families on income up to $250,000. We cannot afford to add $700 billion to the deficit to benefit the wealthiest Americans with almost no economic benefit as Republicans want to do."