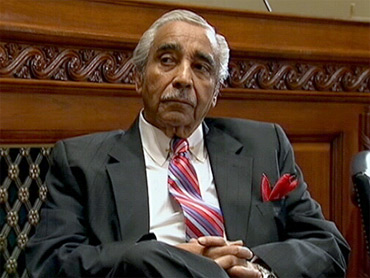 A rare ethics trial is under way for longtime Democratic congressman Rep. Charles Rangel, who has been accused of engaging in financial and fundraising conduct that broke House rules.

The former Ways and Means Committee chairman made an impassioned opening statement, demanding that the proceedings be postponed because he ran out of money to pay his previous attorney after spending nearly $2 million.

Saying "50 years of public service is on the line," Rangel implored the House ethics panel to delay the trial until he can get a new lawyer. When the panel denied Rangel's request he walked out and the proceedings are continuing in his absence.

A prosecuting ethics committee attorney has presented his evidence, said it is overwhelming and asked the committee for a summary judgment against Rangel, reports CBS Radio News' Bob Fuss.

Several members of the committee angrily criticized Rangel's lawyers for leaving the case just weeks before the hearing.

Vermont Democratic Rep. Peter Welch said that no law firm should be "taking the money...and kicking their client by the side of the road." The committee's chief counsel, Blake Chisam, then read aloud the 13 charges of alleged financial and fundraising wrongdoing that have been brought against the 80-year-old Democrat from New York's Harlem district.

Rangel formerly headed the House tax-writing committee. On Monday he faced a panel of four Democrats and four Republicans who are sitting as a jury to determine whether he violated the institution's standards of conduct.

Rangel is a 20-term Democrats from New York's famed Harlem neighborhood. He is accused of 13 counts of financial and fundraising misconduct that violated House rules.

It is only the second time this type of proceeding was held under revamped in-house policing procedures adopted two decades ago.

If the panel finds that Rangel broke the rules, the House ethics panel could recommend that the House vote to condemn Rangel's conduct.

"My family has caught hell" in the investigation that has lasted two-and-a-half years, Rangel said.

The ethics trial is an embarrassment for Democrats who are still reeling from losing their majority in the House to Republicans in Nov. 2 elections.

Rangel's career peaked in 2007 when he became chairman of the Ways and Means Committee. It took a dive last March, when he relinquished that post after his corporate-funded travel was criticized in a separate ethics case.

Rangel and his defense team parted company a few months after he complained in an August speech on the House floor that he could no longer afford legal bills that had reached nearly $2 million.

Rangel bested a crowded primary field in September and went on to easily win reelection in heavily Democratic New York, in spite of the charges.

The longtime lawmaker has stood firm in the face of pressure to resign, both from the GOP and from some within his own party.

The ethics investigation goes back to at least July 2008. Only former Rep. James Traficant, D-Ohio, who was expelled from the House after a criminal conviction, has faced a similar trial since current House ethics procedures were adopted two decades ago.

Key charges portray Rangel as a veteran congressman who thought he could ignore rules on disclosing his assets, and improperly used official resources to raise money for a college center that was a monument to his career.

But an allegation that caught the public's eye was his failure to declare rental income to the IRS from a resort unit he owned in the Dominican Republic.

The case has generated its share of political game-playing. Republicans on the House ethics committee demanded that the proceeding be held before the election, when the trial of the House's fourth-most-senior member could have embarrassed Democrats. The Democratic committee chairman, Zoe Lofgren of California, rejected the request.

The eight-member panel will act as a jury to decide whether there's "clear and convincing evidence" that House rules were broken. Ethics committee lawyers will function as prosecutors.

If Rangel is found to have violated rules, the ethics committee would meet to decide punishment. It could end the case with a critical report, or recommend a House vote expressing displeasure with Rangel's conduct.

Rangel has acknowledged ethical lapses; he's argued he did not intend to break the rules.

The charges allege violations of:

• A House gift ban and restrictions on solicitations. Rangel is accused of using congressional staff, letterhead and workspace to seek donations for the Charles B. Rangel Center for Public Service at the City College of New York. The requests usually went to charitable arms of businesses with issues before Congress, including Rangel's Ways and Means Committee.

• A U.S. government code of ethics. Several allegations fall under this code, among them: Accepting favors (the Rangel Center donations) that could be construed as influencing Rangel's congressional duties; acceptance of a rent-subsidized New York apartment used as a campaign office, when the lease said it was for residential use only; and failure to report taxable income.

• The Ethics in Government Act and a companion House rule requiring "full and complete" public reports of a congressman's income, assets and liabilities each year. Rangel is charged with a pattern of submitting incomplete and inaccurate disclosure statements. He only filed amended reports covering 1998 to 2007 after the investigative ethics panel began looking into his disclosures. He belatedly reported at least $600,000 in assets.