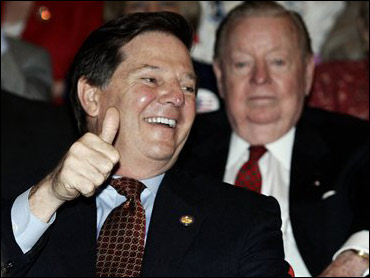 The House voted overwhelmingly Wednesday to reverse Republican-written rules that led Democrats to shut down the ethics committee. Republicans backed the resolution grudgingly.

The Republicans, accused of writing the rules to protect Majority Leader Tom DeLay from investigations, heeded Speaker Dennis Hastert's call for a retreat in order to end the deadlock on the evenly divided panel. The vote was 406-20.

CBS News Correspondent Gloria Borger reports the vote clears the way for the House Ethics Committee to open its own investigation. House Republicans pushed for today's action, worrying that DeLay has become a distraction from their agenda, and his problems a gift to the Democrats, Borger reports.

In debate, Democrats continued to attack DeLay's conduct. Republicans countered that they didn't make a mistake but accepted political reality: In a committee with five members of each party, Democrats would not supply any votes to let the committee operate without a reversal of the rules.

Rep. Louise Slaughter, D-N.Y. countered, "When they thought no one was looking, they passed a package that effectively neutered the committee ... to protect one man from investigation."

All votes against the resolution were cast by Republicans.

"The Democrats remain absolutely unwilling to compromise," said Rep. Doc Hastings, R-Wash., the committee chairman. "It is severely damaging to this institution for the other side of the aisle to keep the doors locked on the ethics committee."

Senior committee Democrat Alan Mollohan of West Virginia countered that the Republican rules would have seriously damaged the committee's ability to conduct investigations.

"What is at issue is . . . whether the House is going to continue to have a credible ethics process. Nothing less than this is at stake here tonight."

Hastings tried to assure the House that there would be no partisanship in any decision to investigate DeLay or any other member.

"No investigation has ever been taken by the committee without bipartisan support," said Hastings, who last week offered to investigate DeLay in a futile effort to break the deadlock.

The Republican lawmakers had endured weeks of intense Democratic criticism — and hometown editorials — complaining that the GOP rule changes were an attempt to protect Majority Leader Tom DeLay from further investigation.

DeLay, R-Texas, was admonished by the committee on three matters last year, and new questions have been raised about whether a lobbyist paid for some of his foreign travel in violation of the rules. DeLay has denied wrongdoing and has volunteered to appear before the ethics committee.

Republicans leaving their weekly meeting in the Capitol basement generally praised Hastert for pivoting on the issue. DeLay seemed annoyed at the crowd of reporters.

"You guys better get out of my way," he said. "Where's our security?"

Several hours later, DeLay seemed to be in a jovial mood at his weekly news conference, where he pledged to support the reversal and said he is pulling together 10 years of travel records for a voluntary submission to the ethics committee.

He denied playing any role in the partisan rules changes that passed the House in January or in the reversal Wednesday.

"This has been the speaker's project all along," he said.

The rules in effect before January allowed investigations to begin if the ethics chairman and ranking minority member failed to act on a complaint in 45 days and no other member requested full committee consideration. The Republican changes provided for an automatic dismissal in case of a tie, a procedure that Hastert said was needed to avoid keeping members in limbo.

In a letter to Democratic leader Nancy Pelosi, Hastert wrote that the changes pushed through in January were an attempt to correct inequities.

Given Democratic opposition, he proposed reverting to the old rules, "leaving the unfairness inherent in the old system in place."

At the same time, he said he hoped the ethics committee could recommend changes for the future.

Hefley was dumped by Hastert as chairman of the evenly divided committee after the panel admonished DeLay. He has been one of the few Republicans who opposed the rule changes from the beginning.

Republican lawmakers, who would not be identified by name because their meeting was closed, said some GOP congressmen didn't want to stop the fight, believing the party could still win the political battle.

Lawmakers said Rep. John Boehner, R-Ohio, backed Hastert in the meeting and noted that a functioning ethics committee wouldn't only open the door for an investigation of DeLay. It would also permit further action on an ethics complaint filed last year against Democratic Rep. Jim McDermott of Washington.

McDermott is accused of violating House rules by leaking to reporters a taped telephone conversation.

Rep. Alan Mollohan of West Virginia, the senior Democrat on the committee, said, "To this point the speaker's actions have been positive. The proposal will be considered and evaluated by the bipartisan yardstick."

At the same time, Mollohan and aides to Pelosi insisted that committee staff must be hired on a bipartisan basis. Republicans early this year unilaterally fired two holdover staff members.

Pelosi said the Republican reversal was "a victory for the American people. Americans understood what was at stake — the integrity of the House — and in one voice demanded that the House return to a credible, viable and nonpartisan ethics process."

Hastert bristled at talk of Democrats dictating committee staffing. "If they get one thing, they'll want another," he said in a brief interview.