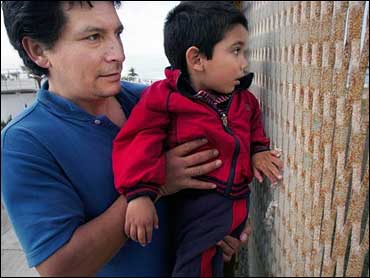 The House acted Friday to stem the tide of illegal immigration by taking steps to tighten border controls and stop unlawful immigrants from getting jobs. But lawmakers left for next year the tougher issue of what to do with the 11 million undocumented people already in the country.

The House legislation, billed as a border protection, anti-terrorism and illegal immigration control act, includes such measures as enlisting military and local law enforcement help in stopping illegal entrants and requiring employers to verify the legal status of their workers. It authorizes the building of a fence along parts of the U.S.-Mexico border.

But it put off consideration of a guest worker program, which President Bush and many in Congress say must be part of a lasting solution to the illegal immigrant crisis.

The vote was 239-182, with opposition coming from Democrats and some Republicans upset by the exclusion of the guest worker issue and other Republicans wanting tougher border control measures.

Bush praised the House for approving the bill. "America is a nation built on the rule of law, and this bill will help us protect our borders and crack down on illegal entry into the United States," he said in a statement. "I urge the Senate to take action on immigration reform so that I can sign a good bill into law."

One measure that Republican leaders wouldn't allow a vote on was a volatile proposal to deny citizenship to babies born in this country to illegal immigrants.

The issue next moves to the Senate, where Majority Leader Bill Frist, R-Tenn., says he will bring up immigration legislation in February that will provide a framework for guest worker ideas.

Nobody is advocating the deportation of 11 million illegal immigrants, said Rep. Jeff Flake, R-Ariz., sponsor of a guest worker measure. Without a temporary worker program, he said, "We simply won't enforce the law, and that's the dirty little secret here."

While many agree with Flake, there are wide differences on the details of a guest worker program. Some lawmakers would require those in the country illegally to leave before applying for such a program, arguing that counterproposals allowing those already here to seek legal status are equivalent to amnesty.

Bush has proposed that undocumented immigrants be allowed to get three-year work visas. They could extend those for an additional three years, but would then have to return to their home countries for a year to apply for a new work permit.

The House bill would beef up border security with the help of local law enforcement and military technology, impose tougher penalties for smuggling and re-entry, and end the "catch and release" policy for illegal non-Mexicans. It makes drunken driving convictions a deportable offense.

The bill makes unlawful presence in the United States, currently a civil offense, a felony. An amendment to reduce the crime from a felony to a misdemeanor was defeated, with many Democrats voting against the proposal in protest over subjecting people who have overstayed their visas to any criminal charges.

The House also voted 273-148 to end the diversity visa lottery program that's open to countries that send few immigrants to the United States. Opponents said it was susceptible to fraud and could be a way for terrorists to enter the country.

On Thursday, the House approved an amendment calling for construction of a fence in parts of California, Arizona, New Mexico and Texas.

The most sweeping provision of the House bill would require all employers in the country, more than 7 million, to submit Social Security numbers and other information to a national data base to verify the legal status of workers.

The U.S. Chamber of Commerce and other business groups protested this provision as unworkable, while immigrant rights groups said some of the new penalties were draconian.

By making it a crime to be present in the country illegally, said the National Immigration Forum, foreign students who drop a class or high tech workers who lose jobs and take too long to find a new employer sponsor would be subject to arrest.

"A migratory reform that only addresses security will not resolve the bilateral immigration problem," Mexican President Vicente Fox's spokesman Ruben Aguilar said Friday. "It is indispensable to establish legal, secure and ordered migration. Our countrymen make an enormous contribution to the United States economy."

But sponsors, led by House Judiciary Committee Chairman James Sensenbrenner, R-Wis., and Homeland Security Committee Chairman Peter King, R-N.Y., insisted the bill was a needed step to restoring the integrity of U.S. borders and re-establishing respect for the law.

The White House said in a statement that it strongly supported the House bill, adding that it "remains committed to comprehensive immigration reform, including a temporary worker program that avoids amnesty."

Mexico also is upset over the approval of building 700 miles of fence along the 2,000-mile U.S.-Mexico border. The bill gives priority for construction in Laredo, Texas, which is across the border from Nuevo Laredo, Mexico, and is where warring drug cartels have been blamed for more than 140 killings this year.

Mexico argues existing barriers built along heavily crossed sections of the border have not stopped migrants from crossing, rather have pushed them through more desolate, dangerous areas.

A record number of more than 415 people died crossing the border illegally in 2005, according to statistics from the U.S. Border Patrol for the fiscal year ending Sept. 30. That compares to the previous record of 383 deaths in 2000.

Mexico's National Human Rights Commission described the U.S. measure as "part of a tendency to criminalize migration with a wall that calls to mind the Berlin Wall."