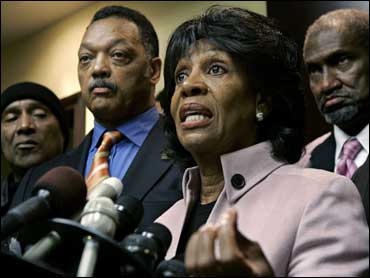 (AP Photo/Ric Francis)
A longtime member of Congress is under investigation for assisting a bank to which she had personal connections get federal bailout money, a congressional ethics panel said this week.

The House ethics panel is investigating Rep. Maxine Waters (D-Calif.) after she arranged in 2008 for a meeting between OneUnited Bank executives and Treasury officials, the Wall Street Journal reports.

Waters' husband, Sidney Williams, was a member of the bank's board until last year, the newspaper reports, and had investments in the bank worth at least $350,000.

Waters, who serves on the House Financial Services Committee, has defended her request for the meeting as part of her efforts to advocate for minority-owned businesses, the Los Angeles Times reports. She reportedly said that she disclosed her husband's ties to the bank and that her influence had nothing to do with the bailout.

The watchdog group Citizens for Responsibility and Ethics in Washington (CREW), however, claims Waters did not disclose her financial ties to OneUnited Bank when she contacted the Treasury Department to arrange the meetings. The group says Treasury officials claimed they only arranged the meeting after hearing from Waters, even though the bank had requested meetings before.

The investigation has landed Waters on CREW's "15 most corrupt members of Congress" list.