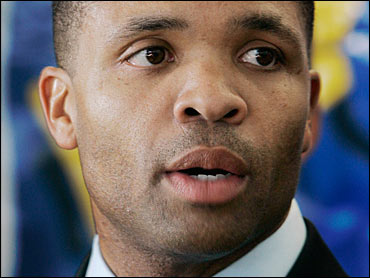 The House ethics committee said Wednesday it will put off for now an expanded investigation into whether Rep. Jesse Jackson Jr. or his representatives tried to buy President Barack Obama's former Senate seat.

The committee revealed that the deferred investigation now includes allegations that Jackson, a Democrat, improperly used his staff in Washington and Chicago to mount a public campaign to secure the Senate seat. The committee acted at the behest of federal prosecutors who already are investigating former Illinois Gov. Rod Blagojevich. The panel normally defers investigations when requested by law enforcement, to avoid interference with prosecutors.

The committee is looking into Jackson's interactions with Blagojevich, who has been indicted on corruption charges including alleged attempts to sell the seat now held by Democratic Sen. Roland Burris.

The congressman says he did nothing wrong.

Jackson's alleged use of staff was in a report by the new Office of Congressional Ethics, which reviews potential ethical violations by House members and staff and refers cases to the ethics committee of five Democrats and five Republicans.

The referral, made public by the ethics committee, stated, "In the course of conducting this review, the OCE learned that staff resources of the representative's Washington, D.C. and Chicago, Illinois offices were used to mount a 'public campaign' to secure the representative's appointment to the U.S. Senate.

"In doing so, Representative Jackson may have violated federal law and House rules concerning the proper use of the Member's Representational Allowance." The allowance is a monetary amount allotted to each congressional office for official operations.

The committee also said it would delay for 45 days inquiries into California Democrat Maxine Waters and Missouri Republican Sam Graves.

Waters' came under scrutiny after former Treasury Department officials said she helped arrange a meeting between regulators and executives at OneUnited Bank last year, without mentioning her husband's financial ties to the institution. Her husband, Sidney Williams, served on the bank's board until early last year and owned at least $250,000 in its stock.

The congresswoman said the National Bankers Association, a trade group, requested the meeting. She defended her role in assisting minority-owned banks in the midst of the nation's financial meltdown and dismissed suggestions she used her influence to steer government aid to the bank.

The committee has been investigating whether Graves used his position on the Small Business Committee to invite a longtime friend, and business partner of his wife, to testify at a committee hearing on the federal regulation of biodiesel and ethanol production.

The committee said it extended the review, in part, to provide Graves with recently discovered material that may be favorable to his case. An earlier review by the Office of Congressional Ethics, which refers cases to the ethics committee, found no wrongdoing.