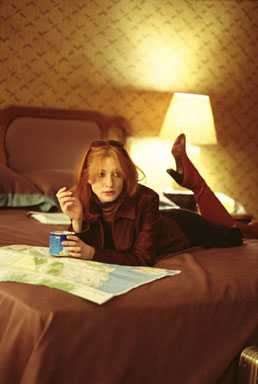 The U.S. House of Representatives passed a bill Wednesday that would make it illegal to dodge parental-consent laws by taking minors across state lines for abortions, the latest effort to chip away at abortion rights after Republican gains in the November elections.

By 270-157, the House sent the bill to the Senate, where it has new momentum as an item on the Republicans' top 10 list of legislative priorities.

Reflecting rising public support for requiring parents' involvement in their pregnant daughters' decisions, the bill would impose fines, jail time or both on adults and doctors involved in most cases where minors were taken out of state to get abortions.

This was the third time since 1998 the House has approved the measure, sponsored by Rep. Ileana Ros-Lehtinen, a Republican from Florida. The Senate has never taken it up and no vote has been set, but Majority Leader Bill Frist, a Republican from Tennessee, has pledged to bring it up for a vote this summer.

In another sign of the measure's new support, Democratic Rep. William Clay of Missouri, who staunchly favors abortion rights and voted against the measure in the past, voted for it on Wednesday. Clay said he switched in response to an outpouring of support for the bill from constituents in his heavily black St. Louis district.

"This bill simply says that a parent has a right to know if their child is having surgery," Clay said.

If passed by the Senate and signed by the president, the bill would represent the fifth measure since President George W. Bush took office in 2001 aimed at reducing the number of abortions.

Tempers flared in the House even before the emotional floor debate.

Democrats complained that their efforts to soften the bill, for example, by exempting from prosecution adult siblings and grandparents who help pregnant minors, were described in the Republican Party-authored committee report as efforts to protect "sexual predators."

Judiciary Committee Chairman James Sensenbrenner, a Republican who authored the panel's report on the bill, defended its language, saying the Democratic amendments would not have specifically excluded child molesters from protections.

"Perhaps these amendments were not properly drafted by the authors when they were submitted in the committee," Sensenbrenner told the House. "That's not the fault of the majority, that's the fault of the people who drafted the amendment."

Rep. Jerry Nadler, a Democrat from New York, called the report by Sensenbrenner's committee "a rape of the rules of this House."

"Would it be fair for an official report of this committee to call this entire bill the 'Rapists and Sexual Predators Right to Sue Act?"' Nadler asked rhetorically.

Last year, Congress made it a separate crime to harm a fetus during an assault on a pregnant woman. It also decided to deny federal funds to state and local agencies that act against health care providers and insurers because they don't provide or pay for abortions.

In 2003 it outlawed what critics call partial birth abortions, generally carried out in the second or third trimester, in which a fetus is partially delivered before being aborted. A year earlier, lawmakers amended the legal definitions for person, human being, child and individual to include any fetus that survives an abortion procedure.

The bill defines a minor as anyone "not older than" 18. More than 30 states have parental notification or consent laws.

The measure provides certain exceptions to a mandatory waiting period and punishments, such as when the abortion would save the life of the mother. Also excepted are any physician presented with documentation showing that a court in the minor's home state waived any parental notification requirements. In addition the bill makes an exception for minors who have signed a written statement saying that she is a victim of sexual abuse by a parent and can back it up with documentation of having reported that abuse to a state authority.

The House rejected two Democratic amendments that would have added immunity from prosecution and civil suits confidants of the minor who help transport her — such as grandparents and clergy — and others involved in the violation, such as taxicab and bus drivers.

Opponents say any gains the bill might make would be dwarfed by health, abuse and legal problems that pregnant girls and their well-meaning confidants might suffer.

Bebe J. Anderson, a lawyer at the Center for Reproductive Rights, said it would produce "a confusing maze of requirements ... designed to isolate some teens and leave others with no safe options.".

"No matter how few people it affects, it's an important bill on the principles," said Frist, who is looking at seeking the Republican Party's presidential nomination in 2008.