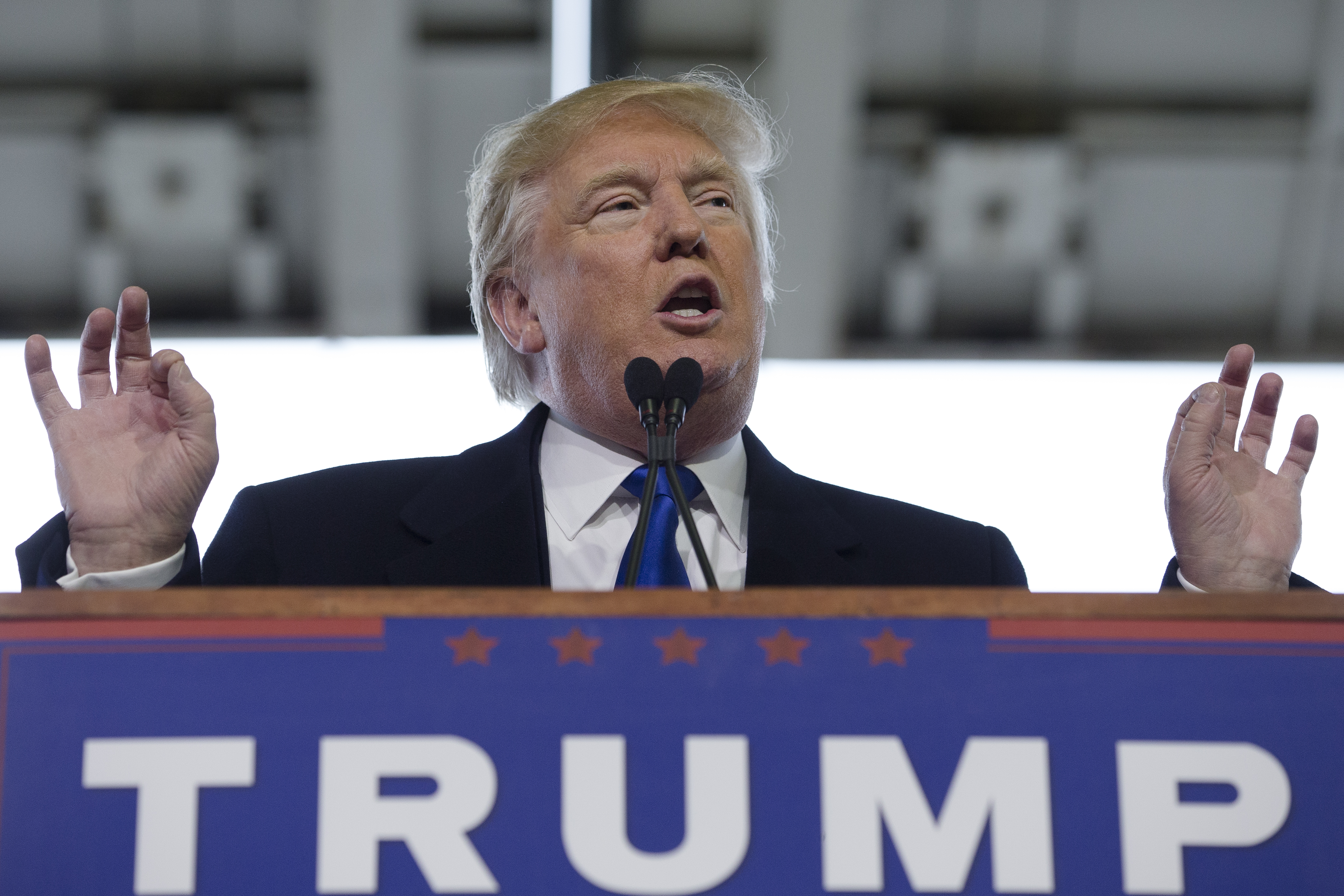 Speaking on the floor of the U.S. Senate, Majority Leader Harry Reid previewed what's to come this November if Donald Trump wins the Republican presidential nomination.

"Republicans are supporting a man who refused to denounce the KKK," Reid said Wednesday, tearing into the "Frankenstein Party" that could nominate Trump at this summer's Republican convention in Cleveland.

"A man who continues to denigrate immigrants, Muslims and the disabled," Reid said. "Donald Trump is the standard-bearer for the Republican Party."

Democrats up and down the ballot plan to savage their Republican opponents if Trump is the GOP standard-bearer, with constant reminders of the things he's said.

After a 2014 drubbing that saw them lose control of the Senate, Democrats are playing offense in 2016, aiming to take back five seats against a Republican Party that must protect senators who came to power in the Republican wave of 2010.With Trump at the top of the ticket, there's an argument to be made that their job might be easier -- especially in Senate battlegrounds like Ohio, Pennsylvania, New Hampshire and Nevada, places with significant populations of suburbanites, young people and minority voters.

"I have no doubt that there are some Republicans who will make a calculation that supporting a xenophobic demagogue is the best way to win their district," said Jon Favreau, a former speechwriter for President Obama.

"But I don't think it helps statewide unless you're running in a Romney state," he said. "My suspicion is that as the race goes on, the places where Marco Rubio and John Kasich do well are the places where Republicans will abandon Trump and Democrats will run up the margins. I think anyone running in an urban or suburban area who doesn't repudiate Trump will have some trouble."

Even in long-shot states like Arizona, where Sen. John McCain is running for re-election, Democrats are trying to score points by raising the specter of Trump.

Ann Kirkpatrick, the front-runner for Arizona's Democratic Senate nomination, released her first ad calling Trump "dangerous for America" and pointing out that McCain has promised to support the Republican nominee, whomever that may be. That's even after Trump denigrated McCain's Vietnam war service.

"No matter what Donald Trump says, John McCain would support him for president," the video says. "Even Republican Senate Majority leader Mitch McConnell is distancing himself from Donald Trump. Not John McCain."

McCain on Thursday said he shared Mitt Romney's concerns about Trump and tweeted, "hope American ppl think hard about who they want as Commander-in-chief." But while Romney refuses to support Trump, McCain said he's behind Trump if he wins the nomination.

Nearly three-quarters of non-Trump GOP voters said they would not be satisfied with Trump if he were the nominee, according to a recent CBS News poll. And as Republican governors and senators across the country remain tepid about committing to support Trump if he secures the GOP nomination, Sen. Majority Leader Mitch McConnell, R-Kentucky, has quietly been laying the groundwork for Senate candidates to distance themselves from Trump in a general election, if necessary.

But Republican strategists are also wondering whether Trump might actually help in certain congressional districts and in pockets of states heavy with white working class voters. He has certainly demonstrated that he can attract new voters -- traditional GOP voters and independents, although this has only been tested in the primary season, and not in the general election.

In Democratic or swing states, Trump's impact is very hard to predict, especially in those races with senators from the class of 2010. Ohio Sen. Rob Portman and Pennsylvania Sen. Pat Toomey fall into this category. Neither has run statewide in a presidential year, and certainly not in a year as surprising as this one.

Trump may drive up turnout in urban and suburban parts of their states, and in rural regions, too, but even if he does, there's no guarantee that these voters will vote Republican down the ballot. And in a presidential year, when Democratic turnout tends to be stronger, Republicans in blue and purple states are more likely to need the support of those outside their party if they want to hold onto their seats.

"In Southeast Ohio and Western Pennsylvania, voters have economic populist views that are closer to an isolationist views than an international view that Trump really resonates with," said GOP strategist Josh Holmes, a former McConnell adviser. "His message is exactly what they want to hear. It's an economic populist argument that might work."

Still, Holmes said that the key for success in a statewide race is to make the race as much about your state as possible rather than the national ticket. By outlining a specific plan on how to govern over the next six years, candidates can draw a significant contrast with Trump on the issues, he said.

In New Hampshire, where Trump nabbed his first primary win by drawing huge turnout from Republicans and independents, Sen. Kelly Ayotte has been challenged by Democratic Gov. Maggie Hassan. New Hampshire-based Republican strategist Dave Carney said it's actually too early to tell whether Trump will help or hurt Ayotte.

"He might go on to attract lots of new folks back into the election booth," Carney said. "And he could repulse folks. Only time will tell. If just 15 percent of Democrats vote for Senator Ayotte, she wins handily."