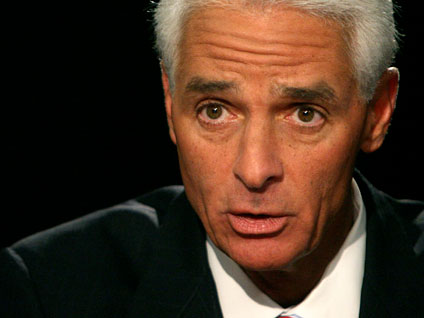 Connecticut Sen. Joe Lieberman and Florida Gov. Charlie Crist have a lot in common. They were both popular elected officials. They both ran as centrist independent candidates for senator. They both embraced presidents from the other party, which alienated their bases.

Joe Lieberman was criticized by his fellow Democrats for getting a kiss from President Bush at his 2006 State of the Union address. Lieberman was well liked by the Bush administration for his strong support of the war in Iraq.

Connecticut Democrats were already upset with Lieberman's support of the war, and "the kiss" alienated them even more. Charlie Crist was criticized by his fellow Republicans for hugging President Obama and supporting his stimulus plan in 2009.

Lieberman's support of the war in Iraq ended up costing him the Democratic primary in 2006. Marco Rubio, the darling of conservatives, had such an overwhelming lead in pre-primary polls that Crist dropped out of the Republican primary. Both candidates ran as "independents" in the general election, but only Lieberman was successful. Why? Character matters.

Lieberman was never criticized for changing his positions for political gain. In fact, he stuck to an unpopular position on the war in Iraq. If Lieberman opposed the war, he would not have had a primary challenge because his positions in domestic issues are in line with the Democratic party. Lieberman would have been a shoe in for re-election. Crist, on the other hand, has been criticized for flip flopping on issues in order to appeal to Democrats.

The 2010 CBS News exit polls (based on preliminary results) painted a very different picture for Crist. He couldn't win any party group, even independents. Rubio won independents 48-34 percent over Crist. Rubio also trounced Crist among Crist's former base, Republicans, by 86-12 percent. Crist had been trying to win over Democrats by saying that he had the best chance to beat Rubio, but most Democrats weren't buying that argument. Democrats voted for the Democratic candidate, Rep. Kendrick Meek, over Crist 46-28 percent.

One other dynamic was also at play in this election that helped Crist's opponents. Rubio, who is Hispanic, won the Hispanic vote with 52 percent of the vote. This contrasts with the national exit poll House vote, in which Hispanics broke for the Democratic candidate 66 to 33 percent. Also, Meek, who is African American, won 80 percent of the African American vote.

Finally, Crist's support of the stimulus was not something that was popular with Florida voters. Only 36 percent of Florida voters thought the stimulus package had helped Florida's economy, while 61 percent said it hurt the economy or didn't make a difference.

Doug Schwartz, Ph.D., is director of the Quinnipiac University Poll.