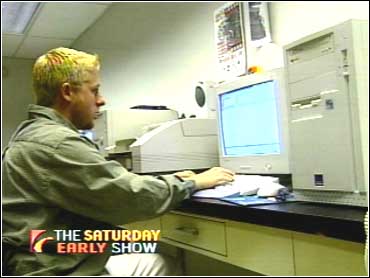 Napster simplifies the way its users share music, says CBS News Reporter Drew Griffin. Songs can be stored on a computer in files called MP3s. These files can be opened and played back just like music on a CD player. But because of varying formats and modems it has been hard to trade music between computers.

Until now. Napster lets users download a program that makes sharing music over the Internet as easy as one mouse click.

Once you download the program, you and hundreds of thousands of other Napster users can share each other's music, in what could possibly be the largest musical library ever assembled.

That's 500,000 songs this guy can now download and burn right onto his own CD, without spending a dime.

The music doesn't come from Napster, it comes from Napster users, who allow others to share their private collections. And no money ever changes hands. "This is totally free. It's not a far stretch to say everyone I know has it," says Mike.

That has the music industry more than a little nervous.

Napster.com is being sued by both the recording industry and the band Metallica, whose drummer Lars Ulrich says Napster is allowing hundreds of thousands of people to steal his music. "To us it's no different than walking into Tower Records and stealing a Metallica CD and walking out with it," says Ulrich.

And Metallica says it has proof to show just how much stealing is going on. The band hired an Internet detective and says it found 317,000 fans downloading its music in just one weekend. "That's clearly illegal," says Urlich.

Napster's defense is that it's not the one breaking the law. The company's attorney claims the Web site only provides the software that makes music sharing possible. It's up to individual users to decide for themselves whether to download recordings that may be copyrighted.

But in an attempt to diffuse the situation, Napster last week banned every single user who illegally downloaded Metallica music from its site.

To campus DJ Brian Houska, the court battle over sharing music seems silly. He says getting music through MP3 computer files is the future, and rock bands like Metallica need to get on board before they become yesterday's music.

"I was getting tons of MP3s before Napster and I'll find a way to get them after," says Houska.

Some groups are getting on board. Limp Bizkit is launching a free concert tour this summer, sponsored by Napster.

Limp Bizkit's Fred Durst says, "Napter's been an amazing way to promote our music and cause massive awareness. The Internet is here and everybody is trying to fight that, which are people who have been living by the standards and practices of the recording industry. Those are the only people who are scared and threatened."

The recording industry is clearly scared. The record companies wan to be paid for their recordings.

The problem is, even if they shut down Napster, without new rules another site will soon pop up.

CBS Worldwide Inc. All Rights Reserved. This material may not be published, broadcast, rewritten, or redistributed