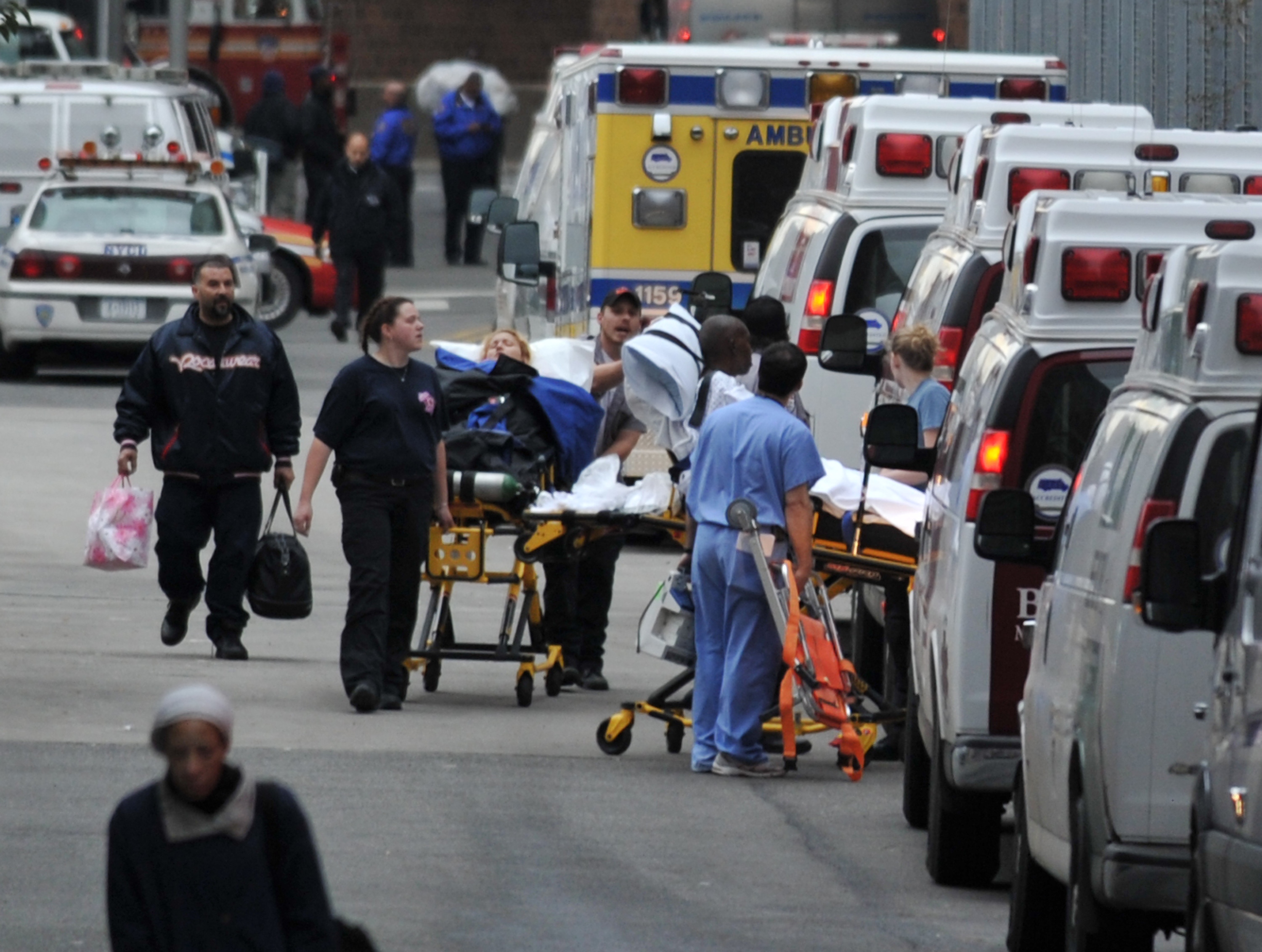 When some of New York City's busiest hospitals went down during superstorm Sandy, others that had power stepped up their efforts to treat patients in need.

Once NYU Langone Medical Center, located by the East River in Manhattan, lost power during the storm on October 29, about 300 patients had to be evacuated. The following day, about 500 patients from Bellevue Hospital Center in lower Manhattan were evacuated when the National Guard discovered millions of gallons of water in a flooded basement.

Not only did these evacuated patients -- some of whom were very sick or in critical condition -- need places to stay, but in the weeks that followed the storm others who would have gone to one of the closed hospitals for births, surgeries or other emergencies still needed somewhere to go.

With more patients coming in with broken bones or injuries caused by motor vehicle accidents, the hospital had to enact disaster preparedness plans which included increasing staff and turning certain lobby areas into patient triage space.

"We just couldn't accommodate them in our emergency rooms," Corwin said of the influx.

For those who may not have been in an emergency but were undergoing treatment by a doctor at an evacuated hospital that can't be put off, other institutions opened their doors.

Dr. Lou Brusco, chief medical officer at St. Luke's-Roosevelt Hospital Center, located in Manhattan's Upper West Side, told CBSNews.com the hospital was able to take over some operational volume from NYU, ranging from neurosurgery patients and people in need of cardiac catheterization, to those who had previously-scheduled elective procedures.

To help, the hospital licensed over 80 physicians, nurses and physician assistants from NYU Langone to operate at St. Luke's-Roosevelt. During the storm, officials also identified units that had not been used for surgical patients and got emergency state waivers to allow doctors to operate in those areas, which has helped with the overflow.

"Thankfully we've got the space to handle it and we've been able to make it up with tighter scheduling and running things for efficiently," said Brusco.

Dennis Connors, deputy executive director of Lenox Hill Hospital, located about two miles north of NYU Langone and Bellevue on Manhattan's Upper East Side, told CBSNews.com one key to smoothing the transition during the uptick of evacuated patients and those in continuous care was credentialing medical staff from NYU to come on board an continue to work with their patient.

The hospital privileged over 200 physicians and independent practitioners and fit them into extended operating room schedules, prioritizing who needed surgeries most.

"I'm pretty confident that the people who have come here have had a pretty positive experience," said Connors. "I think when they see their physician standing in the doorway, it makes them a lot more comfortable."

In these hospitals not directly damaged by the storm, the diverting of staff, resources and other unexpected necessities stemming from the additional patients added unforeseen costs.

St. Luke's-Roosevelt hospital had staff who couldn't leave for three days during the storm and were paid overtime for their services. Brusco said the hospital also had to buy cots, rent additional beds and bring in a company to set up portable oxygen areas in halls that were previously used to treat psychiatric patients.

Connors, of Lenox Hill, which falls under the North-Shore-Long Island Jewish Health System, credits the large hospital network for rapidly stepping up assistance, bringing beds and bassinets at a moment's notice.

"If we were stand-alone and by ourselves, it would not have been as smooth as it was,"

NewYork-Presbyterian/Weill Cornell Medical Center took a revenue hit when it cancelled all elective surgeries through Wednesday following the storm so it could have enough staff on hand. It also had to house 1,700 employees -- some staff that worked 12 hour shifts, slept, then worked another 12 hours -- and supply more than 40,000 meals.

The hospital's CEO Corwin notes the toll could have been worse than added expenses, with the loss of life that was seen at hospitals during Hurricane Katrina.

"I give a lot of credit to the office of emergency medicine and other hospitals in the system who stepped up to the plate," said Corwin. "We saw a huge number of patients. New Yorkers should be really proud of their hospital system."