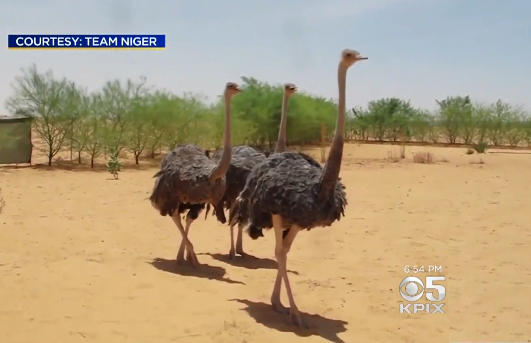 NOVATO, Calif. -- A type of ostrich facing extinction in Africa is getting a boost from volunteers half a world away in an RV storage park in Novato, California, CBS San Francisco reports. The North African ostrich faces fertility issues in the wild, so volunteers have turned the RV storage park into a hatchery lab and incubator. They plan to send the eggs to the Saharan nation of Niger next month.

"The North African ostrich only has eight breeding pairs left in the wild," said Henry Cundill of the Team Niger Project. "It's essentially extinct."

Standing nine feet tall, it is the largest bird in the world and it is on the razor's edge of existence.

Volunteers making use of converted shipping containers may offer them a chance. Led by a San Francisco plumbing contractor, Stephen Gold, a group of dedicated conservationists have created a high-tech, mobile ostrich hatchery that will be transported and set up in a remote area of Niger. The mission: "getting the percentage of hatched eggs up and the survival rate up in order to re-establish the population of the North African ostrich in the wild," said Cundill.

The four-unit complex will include an egg incubator room, a hatchery room, an office and control center and -- most important of all -- a solar energy plant with 17,000 pounds of batteries. Weather conditions in Niger are extreme, with temperatures up to 130 degrees, so air conditioning is vital to protect the equipment and allow more of the hatchlings to survive.

"The incubation and hatching process they're trying to achieve requires controlled temperature and humidity," said project construction manager Peter Amick. "In order to achieve the high success rate they have to have a very controlled climate."

Ostriches lay 15 to 20 eggs at a time, but usually only two or three survive. They're hoping that using solar technology to power breeding and conservation operations in remote areas can increase the odds of survival, not just for ostriches but for a whole host of threatened species in the wild.

"If we actually pull this off and we get it there and it all works, someday I'll be able to say there's a species on this Earth that wouldn't be there if is wasn't for me," said Amick. "I think that'd be pretty cool."

If all goes well, the units will be ready for shipping to Africa in about three weeks.